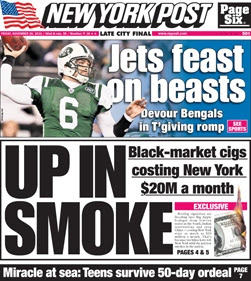 This was today’s front page story in the New York Post.

To Tobacco Enthusiasts, this should come as no surprise.   Recent tax increases in the State of New York have once again been targeted at tobacco.   The idea is that if taxes are increased in tobacco, people will not partake in using tobacco.   What we have discovered is that this cannot be further from the truth.   In fact, it is back-firing like the prohibition policies of the 1920s did.

This taxation policy has not reduced the amount of tobacco usage significantly.   Instead, people are going elsewhere for tobacco.   While the article singled out cigarettes, it should have also pointed out cigars and pipe tobacco.   This has resulted in an “underground” way for New Yorkers to acquire tobacco products.

The numbers are staggering.   Sales of cigarettes have plummeted 27 percent, and costing the State of New York about 20 Million Dollars a month in tax revenue.   This from a state that is crying broke.

The article mentions two ways people are getting around this:

1) New Yorkers are going directly into other states to purchase cigarettes.  Again, this can probably apply to all tobacco products.   They are going into the Indian Reservations, the South and even to China.
2) Truckloads of tobacco are coming in and being bought illegally by neighborhood stores.  Contraband tobacco.

The obvious impacts of #2 are creating more of an arena for criminal activity.  We all know prohibition resulted in the proliferation of rampant underground, organized and widespread criminal activity.  Now this contraband tobacco movement threatens to do the same.  Of course now more money will need to be spent on law enforcement.

What’s more stupid is how legislators believe that taxation is the answer to all problems.  It also shows that people will not accept taxation as a way to regulate their legal right to do something.   Here is a prime example where it has backfired – and now the State of New York is paying for it financially.