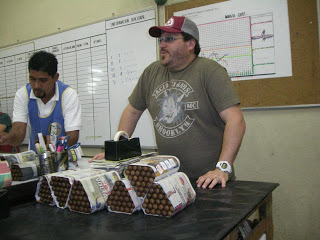 This video was filmed at Oliva’s pre-industry facility that Drew Estate Cigars makes use of.  Drew Estate Chairman Jonathan Drew (with some help from Drew Estate President Steve Saka) gives a talk on some of the tobacco producing countries, highlighting Nicaragua and Ecuador.

Drew Estate has a strong relationship with Oliva and utilize leverage their pre-industry facilities.  Oliva is a leader in growing wrappers in the country of Ecuador.  Drew discusses how Oliva has become a game-changer in the wrapper industry.  He discusses why Ecuadorian Connecticut Shade has replaced (U.S.) Connecticut Shade as a wrapper of choice.  He also mentions Oliva’s role in the Ecuadorian Sumatra wrapper arena.

Perhaps the most interesting part is when Drew discusses the recent surge in Ecuadorian Habano wrapper.  Drew talks about some of the origins of this wrapper and how he feels this will be a dominant wrapper at the 2012 IPCPR trade show.   Saka also mentions how the upcoming Joya de Nicaragua Cuenca y Blanco and Drew Estate’s Willie Herrera blend will use Ecuadorian Habano.