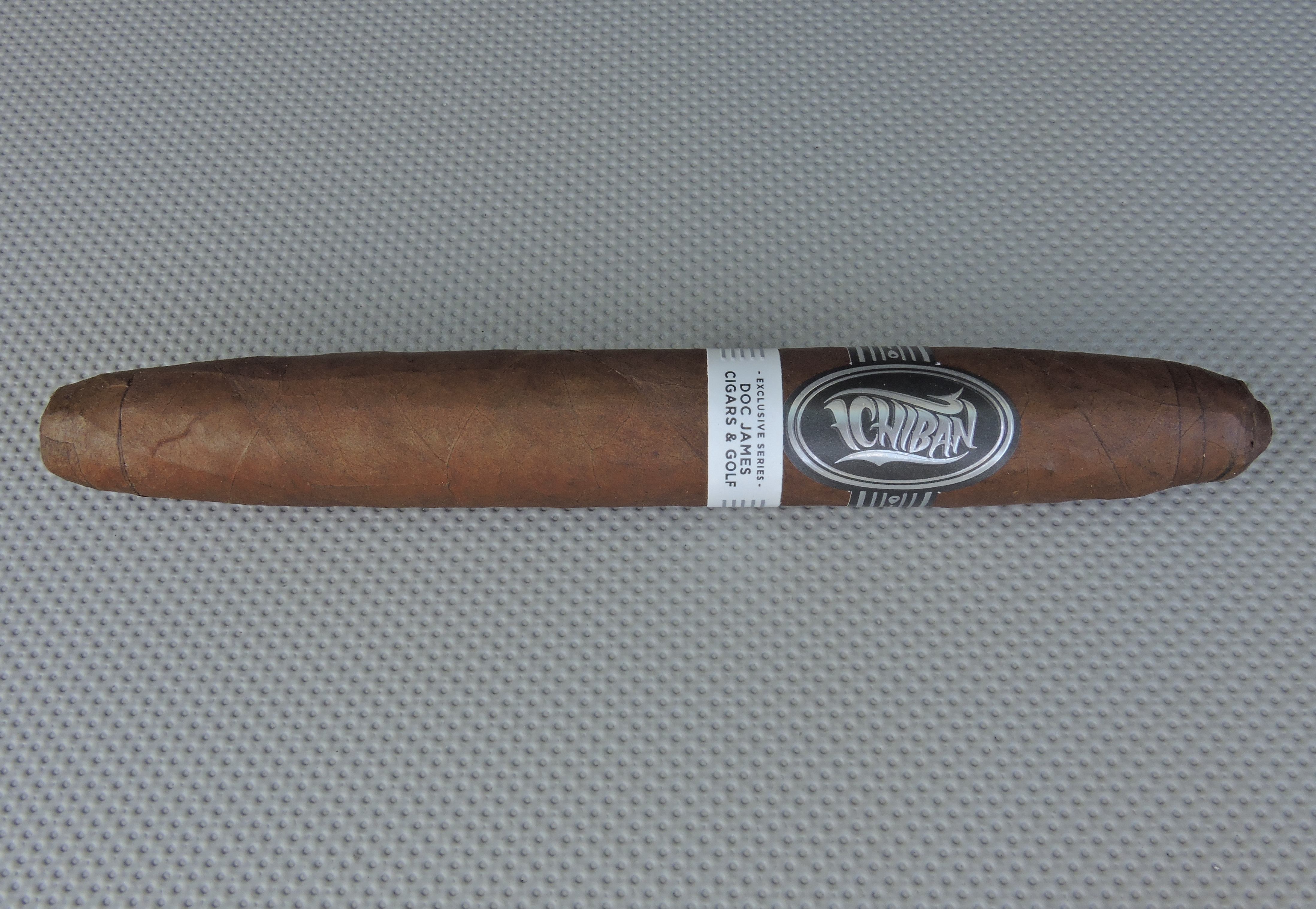 Earlier this year, Room 101 Cigars unveiled its Room 101 Ichiban series. Ichiban is a series of eight planned limited production shop exclusive cigars that will distributed to eight different retailers with each retailer receiving a unique size. The eight sizes all share a common blend.  At press time, four of the eight sizes have been announced. The third of those sizes to be released is the Ranfla –  6 1/2 inch vitola that comes in the brand’s signature perfecto size.  New York retailer Doc James Cigars has become the recipient of the Ichiban Ranfla. Recently, I’ve had an opportunity to smoke the Room 101 Ichiban Ranfla. Overall I have found this to be an excellent release, and one that works well in the perfecto format.

The name Ichiban translates to “first” or “number one”. It features Japanese themed packaging that was inspired from several Room 101 lines incorporating this theme. The Room 101 Ichiban will feature tissue wrapped cigars with outer sleeves that feature the Room 101 Sakura brand mark as well as a Japanese wave pattern. The style was introduced with the Room 101 OSOK line.  Each cigar features a customized secondary band with the shop name.

Without further ado, let’s take a closer look at the Room 101 Ichiban Ranfla and see what this cigar brings to the table.

The Room 101 Ranfla consists of Nicaraguan tobaccos with an Ecuadorian Habano wrapper draped over it. The cigar is produced in Honduras at the AgroIndustrias Laepe factory – the place that makes the lion’s share of Room 101 Cigars.

There are four vitolas available in the Room 101 Ichiban series. It’s been interesting how each of these have been promoted. The Ranfla and Roxxo releases were well promoted with information released to the media. On the other hand the Tiburon and Mutante have been poorly promoted with no press release made available to the media – which I find completely perplexing.  As a result, getting information on the Tiburon and Mutante sizes has proven to be difficult.

The cigars are packaged in ten count boxes with a production of 1,000 cigars per size: 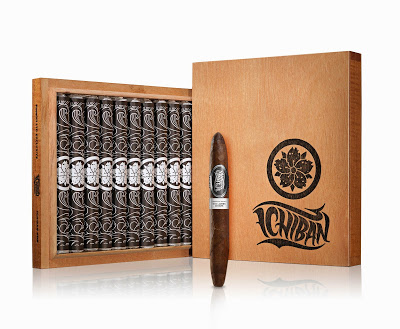 The Ecuadorian Habano wrapper of the Room 101 Ichiban Ranfla has a classic coffee bean color to it. There was some oil on the surface of the wrapper.  On the whole, I found the Ichiban Ranfla to have quite a smooth wrapper – especially for a perfecto. There wasn’t much in the way of visible veins and any visible wrapper seams were on the thin side.

There are two bands on the Room 101 Ichiban Ranfla. The primary band is somewhat reminiscent of the band of the Room 101 Daruma. It is a black in color with silver font designed in landscape mode.  The center of the band has the text “ICHIBAN” in a modern font with adornments above and below it.  There are two silver oval rings near the outer edge of the oval. To the left and right, there is silver striping protruding from the oval. If you look closely on each side of the oval, there are two tiny cigar guillotine cutter designs.  The cigar itself has an open footer and a thin ring on the cap.

There is a white secondary band with black font that is unique the Ichiban Ranfla. On the band it says “EXCLUSIVE SERIES”.  Below that it says “DOC JAMES” in a larger, bolder font. On a third line is the text “CIGARS  & GOLF” in that same bolder font.

Prior to lighting up my Room 101 Ichiban Ranfla I went with my usual choice of a straight cut. I opted to use my Credo Special T cutter using the 36 ring gauge hole to get an ideal cut for this figurado.  Once the cap was removed, I moved on to the pre-light draw. The dry draw provided a mix of cocoa and cedar notes.  There also was a mint-like note I detected. Overall I considered this to be an excellent pre-light draw.  At this point, I was ready to light up the Room 101 Ichiban Ranfla and see what the cigar experience would have in store.

The start to the Room 101 Ichiban Ranfla had a mix of black pepper and natural tobacco notes. It didn’t take long for the flavors to really open up on this cigar. Notes of cocoa, natural tobacco, and some grassy / herbal notes surfaced. The cocoa notes joined the natural tobacco in the forefront. At the same time, the pepper receded and was joined by the herbal / grass notes. There was a fusion at times with these background notes resulting in an “herbal spice”. Meanwhile, the black pepper was also present on the retro-hale.

By the middle of the first third, the natural tobacco along with the grassy, herbal notes were primary.  The herbal component had some spice, but it was not overpowering. The cocoa notes receded into the background, but from time to time the cocoa  still surfaced in the forefront. Meanwhile the black pepper in the background.

As the cigar experience progressed through the second third and into the final third, I found the grassy, herbal notes to take center stage.  During this time the spice component increased. I find the last third of the Ichiban Ranfla to definitely be on the spicy side, but it wasn’t harsh. The resulting nub was slight soft, but cool in temperature.

For a figuardo, I found the Room 101 Ichiban Ranfla to score extremely well. The burn path and the burn line itself remained straight. There were some touch-ups along the way, but they were not out of the norm for what I would expect. The resulting ash was a near white color with a slight amount of darker speckling.  The ash came off the cigar in clean chunks. The burn rate and burn temperature were both ideal.

Burn of the Room 101 Ichiban Ranfla

Overall I found the draw to perform quite well. Cutting to a 36 ring gauge seemed to work very well. The draw itself was not loose, nor was it too tight. This made the Ichiban Ranfla to be an enjoyable smoke from start to finish.

I found there was a nice amount of weight on the palate. Right out of the gate, I found this to be a medium to full-bodied cigar. By the midway point, the Ichiban Ranfla was delivering a full-bodied smoke.  Even if you don’t retro-hale, you will feel the depth of these flavors on the palate.

This Room 101 Ichiban has its fair share of Nicaraguan tobaccos – and you definitely get these flavors with some of the earth and pepper notes. However, what really has amazed me about this blend is how much of a Davidoff-esque quality I get – namely with the grassy and herbal notes. This surprised me considered there is no Dominican tobacco in the blend. I did enjoy this blend in the Ranfla format and felt the figuardo shaper does justice to the blend. This is probably a cigar I’d steer to a more experienced cigar enthusiast as it is fuller in terms of strength and body. As for myself, this is a cigar I would certainly smoke again. It’s easily worthy of a box split.

At press time, the Room 101 Ichiban is still available for order from Doc James Cigars.