Without further ado, let’s take a closer look at the latest candela barber pole – the Alec Bradley Black Market Filthy Hooligan 2016 and see what this cigar brings to the table.

The Filthy Hooligan Barber Pole uses Candela from Honduras intertwined with a Jalapa wrapper from Nicaragua.

The Alec Bradley Black Market Filthy Hooligan Barber Pole is available in one size – a  6 x 50 toro. This is the same size vitola as the previous three installments of the Filthy Hooligan. The cigars are packaged 22 per box. There has been a  total production of 2,000 boxes.

For the Filthy Hooligan Barber Pole, the primary band also has an olive color that blends nicely with the candela portion. There is an oval background with black and white trim. On that oval background is olive and black barber pole image on the front of the band. Over that barber pole image, a white ribbon is draped on it with the text “ALEC BRADLEY” in a gothic style dark font. Above the barber pole design on the band are the words “FILTHY” and “HOOLIGAN” in white font arrange in a curved style. Outside the oval background is a beige textured background. There are various adornments in white and black font, including the Black Market logo. On the far right of the band is a black and white Alec Bradley badge.

There is a secondary band sitting below the primary band. The front of the band has a charcoal gray textured background with the text “BLACK MARKET” in a white modern font. Going to the far left and right is an olive and black barber pole pattern.

As I normally do, I went with a straight cut to remove the cap of the Filthy Hooligan Barber Pole. Once the cap was clipped it was on to the pre-light draw. On the dry draw, I definitely detected a classic candela grassy note. There was also a slight bitter tobacco note. I wasn’t overly blown away by this pre-light draw, but since we do not score this, there was no loss of points here. At this point I was ready to light up the Filthy Hooligan Barber Pole and see what the overall smoking experience would have in store.

The start to the Alec Bradley Black Market Filthy Hooligan Barber Pole delivered more grassy notes along with some white pepper and a slight cream note. The bitter tobacco notes from the pre-light draw were no longer present. The grass notes became dominant early on. During this stage, there was no doubt I was smoking candela. The pepper and cream notes moved into the background. Meanwhile, the white pepper was present on the retro-hale, but was not overpowering.

As the cigar moved through the first third, a coffee note surfaced on the after-draw. Toward the end of the first third, the grassy component subsided slightly. Meanwhile the coffee notes moved on to the full-draw joining the pepper and cream in the background. With the grassiness subsiding, the other notes soon played a more key role.

The coffee notes continued to play more of a role in the second third as it moved toward the forefront. By the second third, the Filthy Hooligan smoked more like a barber pole as it alternated with the grassy notes as to which one had the edge.

By the last third, the grass notes moved back into the forefront. I didn’t find the grassiness as overpowering as the first third. The pepper, coffee, and cream notes were still present in the background. This is the way the flavor profile remained until the end. The resulting nub was firm to the touch and cool in temperature.

From a burn perspective, I found the Filthy Hooligan Barber Pole performed quite well. The burn took a straight path. There was a slight curvature on the burn line itself that was easily remedied with some touch-ups. I didn’t find this to be a cigar to require an excessive amount of touch-ups. The resulting ash had a little bit of flaking early on, but for the most part this was an ash on the firmer side. The ash itself had a salt and pepper color skewed toward the darker side. The burn rate and burn temperature were both ideal. 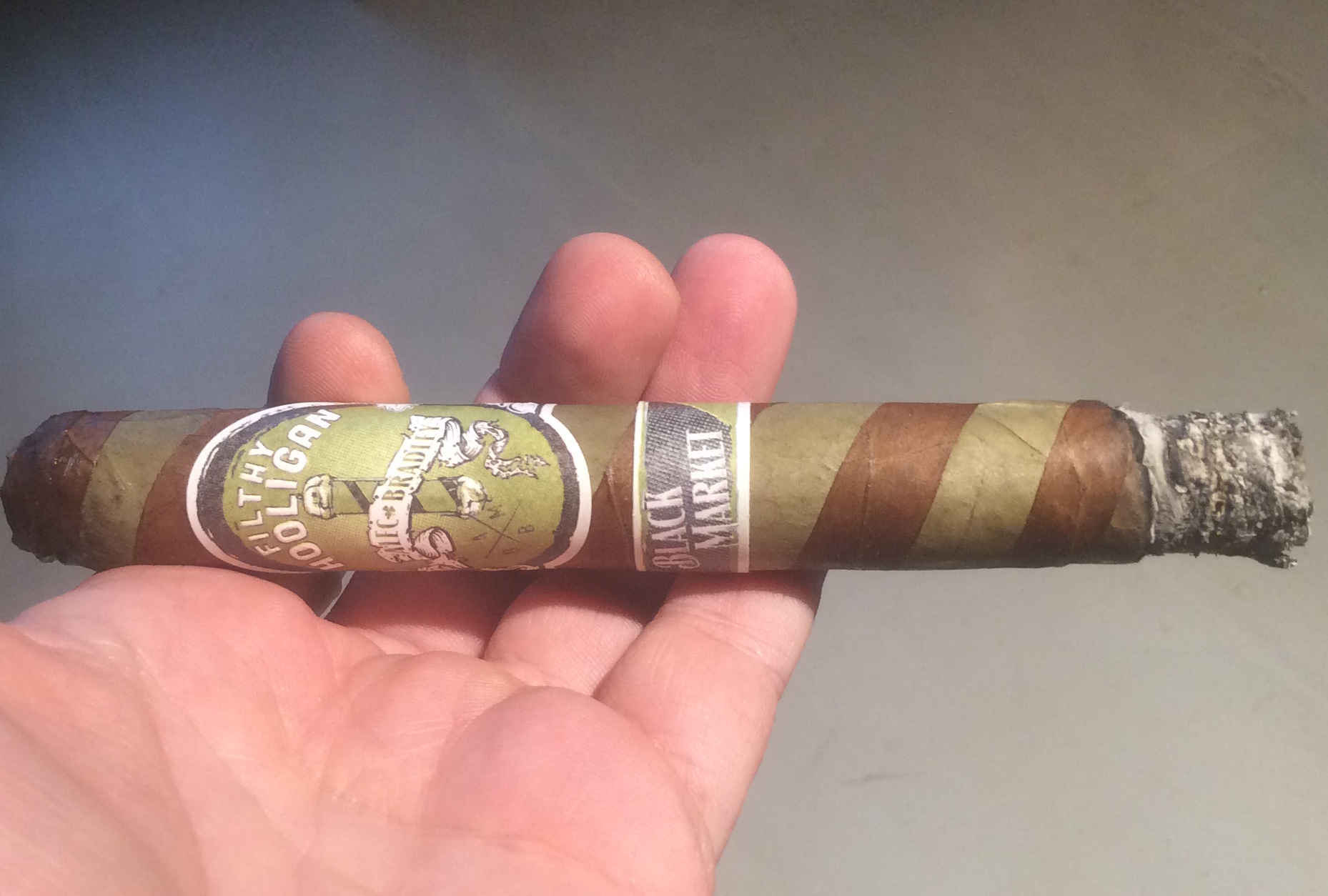 The draw was not too tight, nor was it too loose. I found this cigar produced an ample amount of smoke – which I like in a cigar.

From a strength perspective, the Filthy Hooligan Barber Pole is not going to push the boundaries of what a cigar with a candela wrapper will have. I found the strength of this cigar to be in the mild to medium range. Meanwhile the flavors produced were medium-bodied. The strength and body of the Filthy Hooligan Barber Pole didn’t change much as I smoked this cigar. As for strength versus body, I found the body had the edge.

The Alec Bradley Black Market Filthy Hooligan Barber Pole is going to provide a nice dose of candela notes early on. I did find the grassy notes a little too dominant early on, but as the cigar progressed I found some of the effects of the barber pole took hold and it became more enjoyable. I have found some of the previous iterations of the Filthy Hooligan to age very nicely, and I have no reason to believe the Filthy Hooligan Barber Pole won’t do the same thing. This is a cigar I’d steer to someone who enjoys candela – whether experienced or novice. As for myself, this is a cigar I’d reach for from time to time – and it’s one I want to see how this ages. It’s definitely a cigar worth trying one.