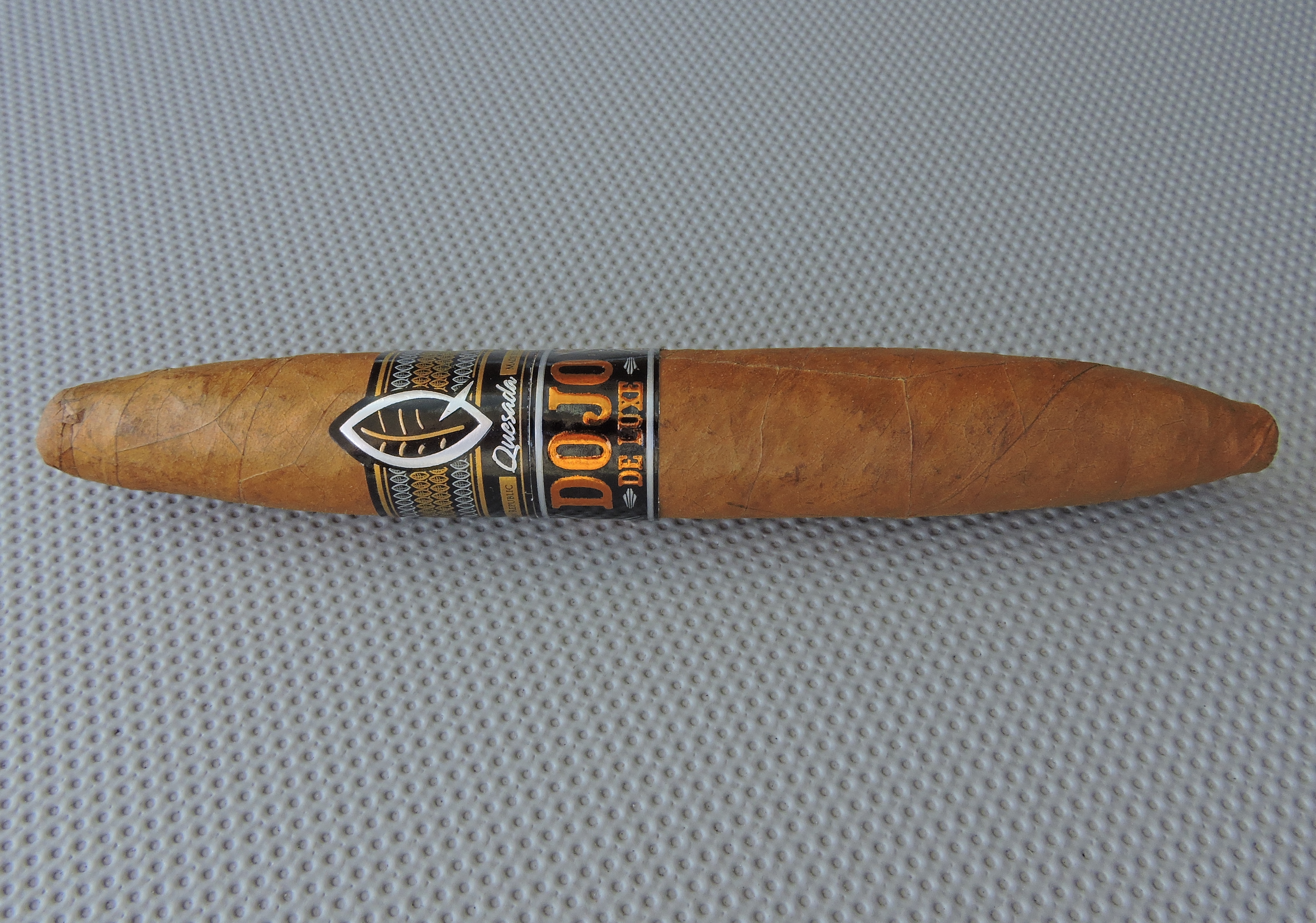 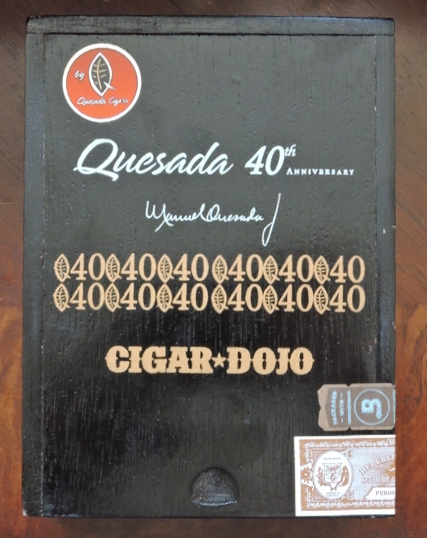 The Quesada Dojo de Luxe is being exclusively sold at Smoke Inn located in South Florida. 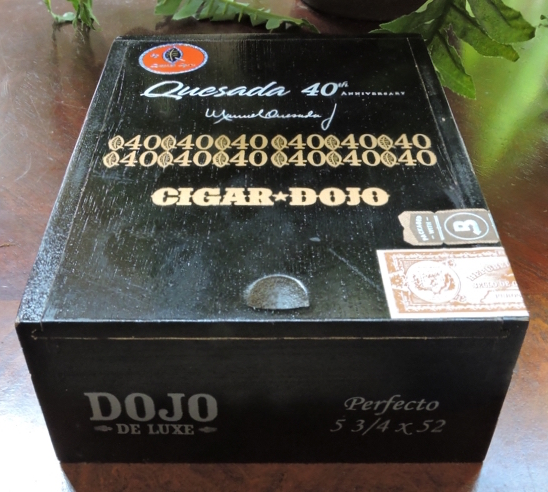 The following are the six collaborations that Cigar Dojo has released:

Without further ado, let’s break down the Quesada Dojo de Luxe and see what the smoking experience has in store.

Including the Corona Clasica, there have been three cigars based on that original blend.

The Dojo de Luxe is packaged in ten count boxes. 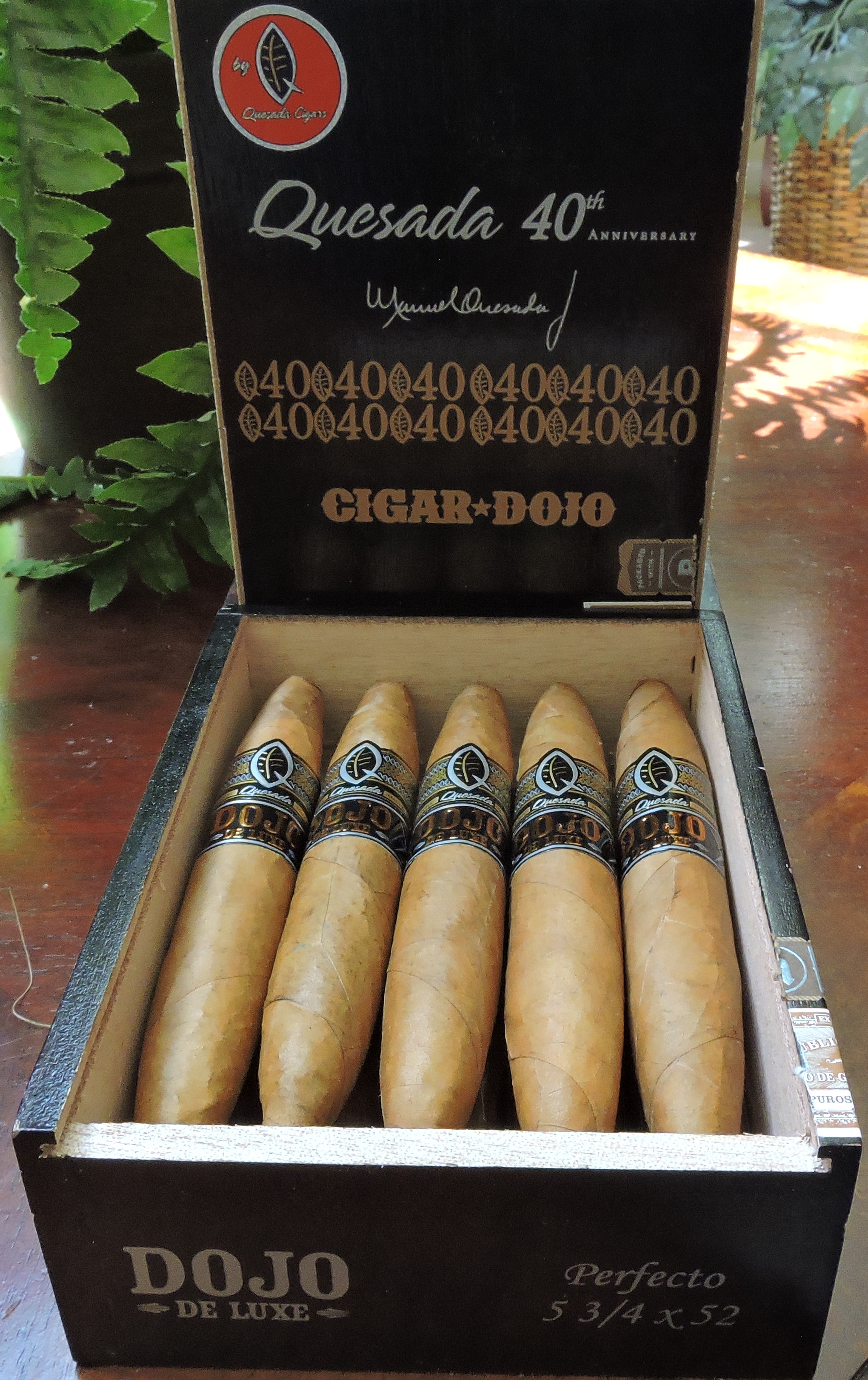 The Quesada Dojo De Luxe is a light brown wrapper with a silky complexion to it. The surface is the wrapper is slightly bumpy. The wrapper has some thin visible veins and some visible wrapper seams. There is a gentle taper toward the head of the cigar leaving a small cap. The taper toward the footer is slightly steeper – almost creating the nozzle-like effect. The footer, while smaller in circumference is still open. 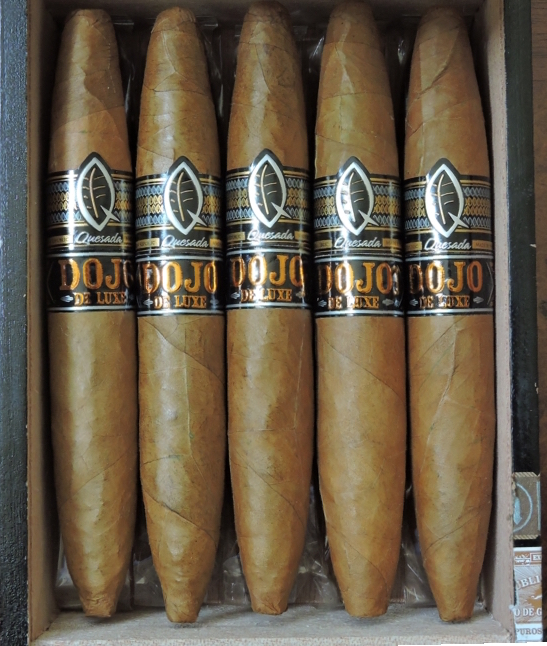 Close Up of the Quesada Dojo de Luxe

There are two bands on the Quesada Dojo de Luxe. The first is the silver, black band that is seen on many Quesada cigars. It features the large silver and gold Quesada “Q”-shaped leaf logo. Below the leaf is the text “Quesada” in silver cursive font. To the left and right of this text is a gold stripe. On the left stripe is the text “DOMINICAN REPUBLIC” in small black font. On the right stripe is the text “MADE BY HAND” in small black font. Finally, surrounding the leaf logo to the left and right are silver and gold rows of miniature “Q”-shaped leaf logos.

One thing I have liked about each of the Cigar Dojo exclusives is how they have incorporated their branding onto the bands. With the Dojo de Luxe, the Cigar Dojo branding is featured on the secondary band. The secondary band rests just below the primary band. It is black in color with silver and black trim. Prominently displayed on the band is the text “DOJO” in large copper font. Just below that text is the text “DE LUXE” in a smaller copper font.

Before lighting up the Quesada Dojo De Luxe, I went with a straight cut. As have done with most of my perfectos, I used my Credo Special T cutter with the 36 ring gauge hole to get an ideal cut for this perfecto. Once the cap was removed, I moved on to the pre-light draw phase. The dry draw delivered a mix of cream and wood. Overall I considered this to be a simple, but satisfactory. At this point I was ready to light up my Quesada Dojo De Luxe and awaited what the smoking experience would have in store.

The Quesada Dojo De Luxe started out with notes of wood, cedar, cream, and cherry. The cherry note was more of a sour cherry varietal. “Sour cherry” should not be construed as a negative as it balanced out some sweetness coming from this particular note. Meanwhile, the cedar and cherry notes became primary while the generic wood and cream notes moved into the background. The retro-hale produced a combination of cedar and a slight amount of black pepper.

Later in the first third, a Cuban-style “twang” emerged in the forefront (something that I consider to be a convergence of the cedar, cherry, and some natural tobacco flavors). If you like this particular note, you will get a nice dose of it here. Meanwhile there were notes of cream, generic wood, and now black pepper in the background.

Just past the midway point of the Quesada Dojo de Luxe, the “twang” broke apart. Standalone notes of the sour cherry and cedar resurfaced again along some bready notes. I still detected the black pepper, generic wood, and a touch of cream in the background.

The last third saw the same flavor profile as above, but there was definitely an increase in black pepper. The black pepper didn’t quite overtake the cherry, cedar, and bread combination in the forefront, but it came close. This is the way the Quesada Dojo de Luxe came to a close. The resulting nub was outstanding for a perfecto – cool in temperature and firm to the touch.

When it comes to the burn, the Quesada Dojo de Luxe scores very nicely. This cigar maintained  a straight burn path from start to finish. The burn line was also relatively straight. The Dojo de Luxe is cigar that had a light colored gray ash with some darker speckling. I found this to be a firm ash and one that came off the cigar in clean chunks. The burn temperature was ideal for this cigar, but I did find this cigar to burn a little fast (I found these averaged around 70 minutes to smoke). The quicker burn rate only reduced the smoking time and didn’t affect the combustion. 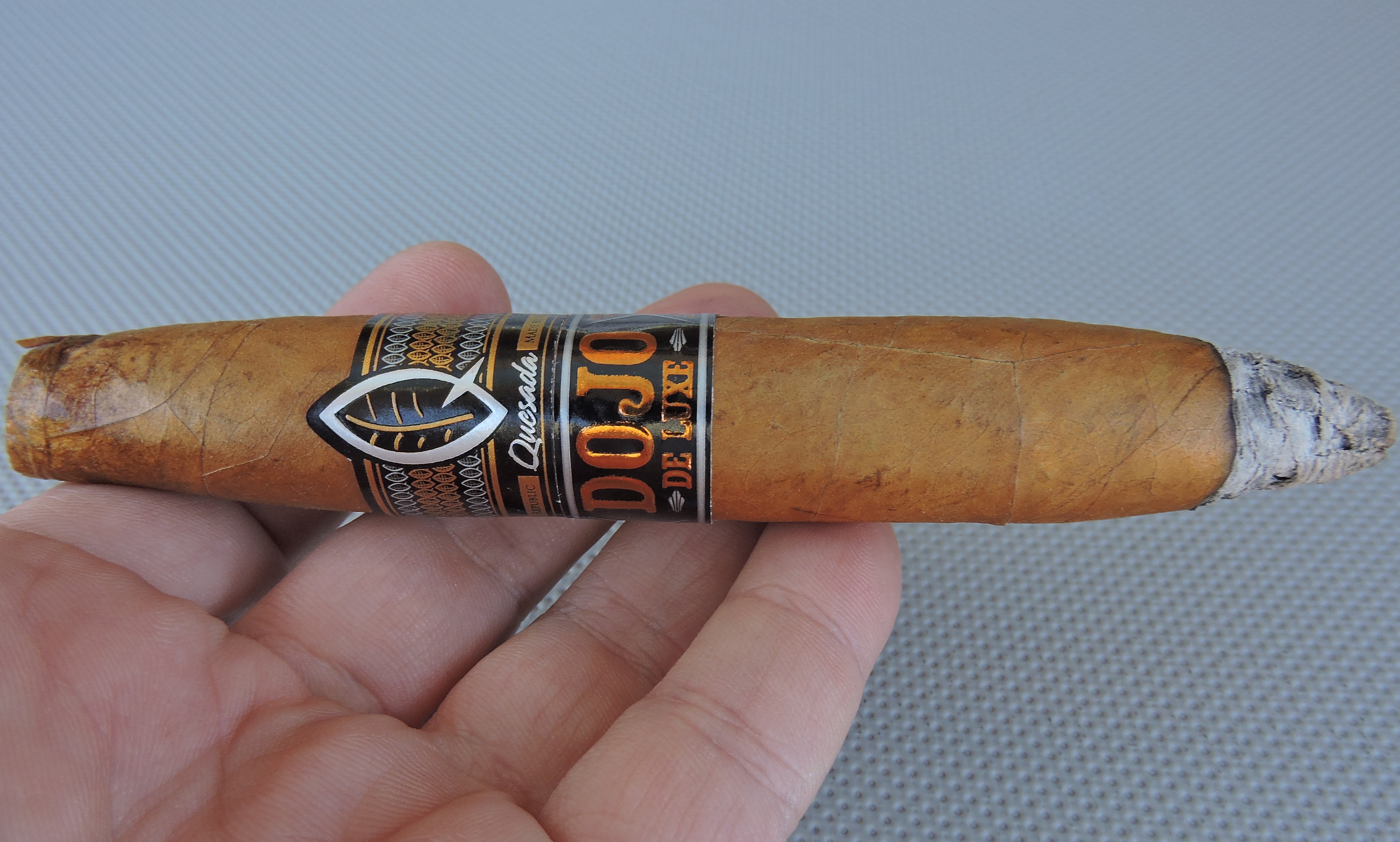 I’ll infer the quicker burn was tied to a more open draw. While not “very loose”, this draw did produce an nice amount of smoke. While the draw was more open, I never had to walk on eggshells with this cigar to control the combustion.

I feel comfortable saying the Quesada Dojo De Luxe is the most dialed back of the Dojo released cigars. While going through the tapered footer, the Dojo De Luxe started out as a mild to medium strength, mild to medium-bodied cigar. Once the cigar burned through the tapered section and reached the main shank, both the strength and body progressed to medium – and remained there for the duration of the smoke.

In terms of strength versus body, I found both attributes to balance each other well – with neither one overshadowing the other.

On one hand, the Quesada Dojo de Luxe does satisfy the objectives of this release – namely delivering on a classic and Cubanesque style smoking experience. As mentioned, this is a more dialed back release for the Dojo series. It’s a cigar with with a nice flavor and a good amount of complexity.

On the other hand, when this is compared to the original Quesada 40th Anniversary Corona Clasica, I did find it came up a a little short. The Dojo De Luxe delivers quite a different profile – and it’s a testament to why “size matters” when it comes to cigar blends. It’s important to know that I consider thee Corona Clasica to be one of the all-time epic smokes out of Quesada, so in many cases the Dojo De Luxe is going to be compared to a cigar where the bar is very high.  Looking at this cigar standalone, it’s pretty good. It’s a cigar that I’d recommend to any cigar enthusiast, and it’s one that is worthy of a box split in my book.

Note: Cigar Dojo is a member of the Cigar Coop Media Partner Network. At press time, Smoke Inn also is a sponsor with Cigar Coop.