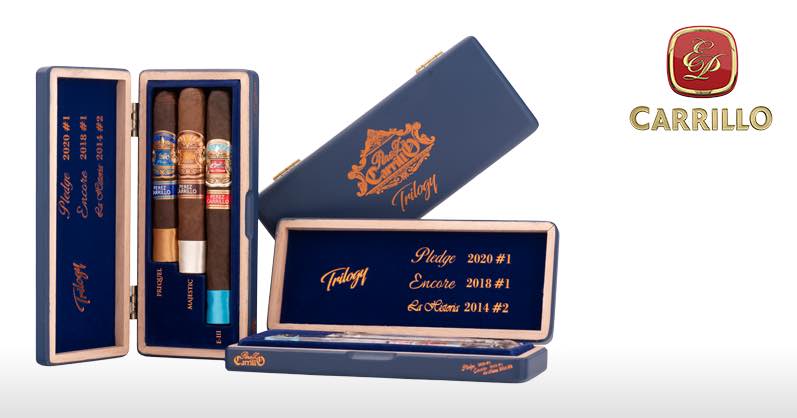 E.P. Carrillo has announced the release of the Perez-Carrillo Trilogy. It’s a three-cigar sampler consisting of one vitola from each of the Perez-Carrillo Family Series lines in the E.P. Carrillo portfolio. Each of these three vitolas has also placed either #1 or #2 on the Cigar Aficionado Top 25. The cigars are presented in a special three-count wooden sampler box. The company has already begun shipping cigars to retailers.

The La Historia E-III was a cigar that finished as the #2 Cigar of the Year on Cigar Aficionado in 2014. La Historia consists of a San Andres Mexican wrapper, Ecuadorian Sumatra binder, and a combination of Nicaraguan and Dominican fillers. The E-III is a 6 7/8 x 54 box-pressed vitola.

Finally, the Pledge Prequel which captured Cigar Aficionado’s #1 Cigar of the Year in 2020, is the final cigar in the Trilogy. It consists of a Connecticut Havana wrapper over an Ecuadorian Binder and Nicaraguan fillers. The Prequel is the 5 x 50 Robusto size of the line.

The Trilogy is currently being showcased at the TPE 2021 which opened in Las Vegas, Nevada on May 12.