News: Emilio Grimalkin to be re-branded as La Musa 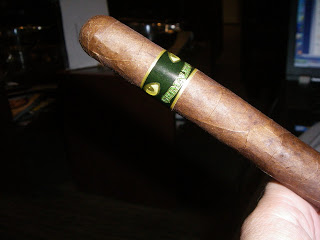 Gary Griffith, brand developer for Emilio Cigars announced on the Emilio Cigars’ blog that that the Grimalkin cigar is going to be re-branded as the La Musa cigar.

This announcement is not a complete surprise as earlier this month, Griffith announced he was considering a name change for Grimalkin.   While Grimalkin was one of the best received cigars in the industry for 2011 (we had it ranked at #9 for 2011), the banding at always been met with some criticism.

Griffith says on the Emilio Cigars’ blog, that he had a challenge on what the subsequent line extensions to Grimalkin would be called.  He recognized the band “drew criticism in the marketplace…and I listened”.(*)

Griffith switches the theme from Scottish folklore to Ancient Greece with the name change to La Musa.  To cigar enthusiasts and fans of Emilio, the best news is that the blend is going to stay exactly the same and it will continue to be made in the same factory.  With the La Musa, the cigar will get a new band, and while the box shape will remain the same, Griffith will give the box more “eye appeal” (*).  No timetable has been announced when the re-branding will be rolled out.

As part of an on-going theme, there will be three subsequent blends added to the series that will come from the same factory as La Musa.  These will be called Melete, Aoide, and Mneme.  For those unfamiliar with Greek mythology, these are the names of three Greek Muses that were inspiring goddesses of song, poetry, and the arts.  In Greek mythology, Metele, Aoide, and Mneme were all sisters and were the originally three.  Plans are for the first of these follow-up releases to debut at the 2012 IPCPR trade show in Orlando, Florida.

The Muses, according to the earliest writers, were the inspiring goddesses of song, and, according to later noticus, divinities presiding over the different kinds of poetry, and over the arts and sciences.

(*) The full blog post on the Emilio Cigars’ blog is here.