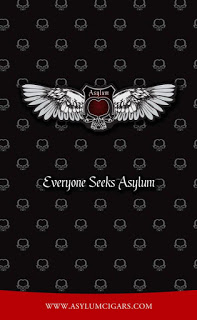 Asylum Cigars is adding a Honduran puro with a corojo wrapper to its Asylum 13 line of cigars.  First details of the new Asylum 13 Corojo were reported first by Cigar Aficionado.

The Asylum 13 Corojo will mark the fifth blend to be a part of Asylum Cigars.  This cigar joins Asylum, Asylum 13, Asylum 13 Ogre, and Schizo lines.

Asylum Cigars launched in 2012.
The company was founded by Kevin Baxter and Tom Lazuka.  The duo is
partnering with Christian Eiroa’s Fabricas Unidas who is handling
distribution for the cigar line.

The Asylum 13 Corojo marks the first Honduran puro to be a part of the Asylum Cigars’ family.  The cigar is being rolled at Tabacos Rancho Jamastran factory in Honduras.  Eiroa’s CLE brand also has a corojo-seed Honduran puro, the CLE Corojo.  The CLE Corojo finished as our #22 Cigar of the Year for 2012.

According to the report, the Asylum 13 Corojo is being targeted for a April, 2013 release.

Here are the specifics of the Asylum 13 Corojo:

The Asylum 13 Corojo is initially being launched in four sizes:

Update (4/4/13):  We confirmed Asylum 13 is being launched in four sizes and updated appropriately above