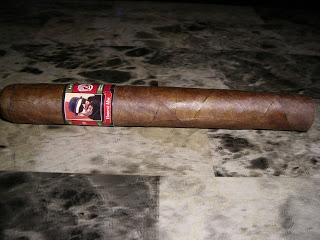 The Ortega Wild Bunch 2013 Honest Abe “Ringmaster” is the sixth installment in a monthly series of cigars being developed by Ortega Premium Cigars. The Ortega Wild Bunch 2013 series is a unique limited production cigar concept that was introduced by Ortega Premium Cigars.The concept behind the Ortega Wild Bunch is to dedicate a cigar to various cigar enthusiasts whom company president Eddie Ortega has personally met during his time in the cigar industry. During 2013, each month a different cigar – in a different size and blend will be released as a tribute to these various people. The Honest Abe “Ringmaster” is the June installment and marks the halfway point of this 2013 series.  One thing that has been a pattern in this series is that each smoke not only differs greatly from the others, but it also brings its own unique qualities to the table.  The Honest Abe “Ringmaster” is no exception.  This proves to be an outstanding addition into this series.

While some of the characters of the Wild Bunch 2013 series have been anonymous, the Honest Abe is not one of them.  This is one of many nicknames for South Florida retailer and Kiss My Ash Radio host Abe Dababneh.  This marks the second cigar released that incoporates one of Dababneh’s nicknames.  Earlier this year, Dababneh’s Smoke Inn released his retail-exclusive Room 101 Big Delicious (Big Delicious is another nickname for Dababneh).  The inner part of the box that houses this cigar reads as follows to describe the character of “Honest Abe”:

Abe is indomitable character with an imposing facade but a heart of gold.  He is simultaneously a successful retailer, radio host, graphic designer, and master marketer. Eight days a week he can be found at one of his many South Florida cigar shops or entertaining aficionados world-wide on the airwaves of KissMyAsh radio. In this industry if you don’t know Honest Abe you’re out of touch because he truly is The Ring Master!

Without further ado, let’s break down the Ortega Wild Bunch Honest Abe “Ringmaster” and see what this cigar brings to the table.
Blend Profile

This particular blend seems to have been kept somewhat under wraps.  While the binder and filler have been listed as undisclosed, we’ve seen some unofficial reports that it is Nicaraguan.  The wrapper was documented in the inside of the box.  The Ortega Wild Bunch 2013 series is made at the My Father Cigar factory in Esteli, Nicaragua.

As
mentioned above, each monthly release of the Wild Bunch is a unique
blend. The vitola is named “Ringmaster” and measures 6 1/2 x 52.  In this case, this is the same vitola dimensions as the March release, Island Jim WaHoo.

It is worth noting that of the first six releases of the Ortega Wild Bunch, the only vitola that was less than 6 inches in length was the Iron Mike I-Beam.

As with the other installments of the Ortega Wild Bunch 2013, the band of the Honest Abe is highlighted by an illustration of the “Honest Abe” character done by Neal Wollenberg. Wollenberg also did the art work for the boxes.

As I usually do I opted for a straight cut to begin my cigar experience.  Once the cap was removed from the Honest Abe “Ringmaster”, it was time to move on to the pre-light draw.  The cold draw provided a mix of earth, pepper, and some natural tobacco sweetness.  Overall, I considered this pre-light draw to be satisfactory.  At this point, I was ready to light the foot of the Honest Abe “Ringmaster” and see what the actual smoking experience would bring to the table.

As I said up front, the Ortega Wild Bunch 2013 does a great job at bringing unique qualities to the table.  This is reflected in each of the flavor profiles of the blends.  The Honest Abe “Ringmaster” follows suit here.

The start to the Honest Abe “Ringmaster” gave me a combination of cedar and pepper.  This spice combination quickly transitioned to more classic pepper.  The pepper was soon joined by grass and natural tobacco flavors.  By the five percent mark,  the grass and natural tobacco became the primary flavors.  Meanwhile, I found the pepper to be prominent on the retro-hale.  The pepper was also present on the retro-hale.  As I went through these early phases, this cigar actually had a Dominican flavor profile to it.

In the second third, the cigar changed from Dominican to more of Nicaraguan profile.  I detected some notes of coffee in the background.  The coffee notes would increase and as the Honest Abe entered the second half, they joined the natural tobacco in the forefront.  The pepper flavors also increased and were close behind.  The grass flavors diminished.

The last third saw the pepper notes really take control on both the tongue and on the retro-hale. There were points where I actually had a little water in my eyes.  The coffee and natural tobacco became secondary notes.  While the pepper was strong, the cigar never got harsh. This was the way the flavor profile would hold until the end.  The resulting nub was cool in temperature, but soft to the touch.

From both a burn and draw perspective, the Honest Abe “Ringmaster” scored quite well.  The burn line remained relatively straight from start to finish – requiring only a few touch-ups along the way. The resulting ash was firm with a salt and pepper color.  The ash was not prone to any significant flaking or flowering. The burn rate and burn temperature were both ideal.

I found the draw to be excellent on this cigar.  This was a very low maintenance cigar to puff on from start to finish.

From a strength perspective, I found the Honest Abe “Ringmaster” had some kick to it.  The cigar settles into medium to full strength in the early phases.  It remains like that for most of the cigar experience.  By the last third, the strength does kick up into full strength.  While it becomes full strength, it never becomes overwhelming.

From a flavor standpoint, the flavors have some nice depth to them.  I assessed this to be a full-bodied smoke from start to finish.  Overall, the Honest Abe “Ringmaster” will have a slight edge over flavor over strength – except at the very end where the two attributes are on par with each other.

As I’ve said a couple of times when reviewing the Ortega Wild Bunch 2013 series, company President Eddie Ortega has undertaken an enormous task with this line of cigars.  It has to be a great challenge taking twelve different blends to market in a one year span.  This is underscored by the fact that Ortega Premium Cigars is a small company.  With the Honest Abe “Ringmaster”, Ortega succeeds in delivering a high quality, enjoyable smoke.  I found the Honest Abe to have great flavor, great construction, and some nice complexity.  While the strength is medium to full for most of the cigar, I still would recommend this to even a novice cigar enthusiast who wants to graduate to a stronger cigar. Experienced cigar enthusiasts will appreciate the flavor and complexity this cigar brings to the table.  As for myself, this is a cigar I would definitely reach for and smoke again.

Source: One cigar for this assessment was given to be by a friend, a second was purchased at Outland Cigars in Charlotte, North Carolina.