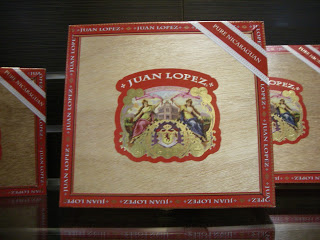 At the 2013 IPCPR Trade Show in Las Vegas, Atladis USA resurrected its Juan Lopez line of cigars.  This was a line that Altadis had acquired the U.S. naming rights for about ten years ago – and it is a well-known brand in Cuba.  The line had been discontinued some time ago.  The new Juan Lopez line appears to be one of the Nicaraguan blends that was mentioned on the 6/1/13 Cigar Dave Show by Altadis USA Vice President Janelle Rosenfeld.

The resurrected Juan Lopez line is an all new Nicaraguan puro blend.  The cigar is positoned as “bold, rich, and robust”.

The cigar is being launched in three sizes.  The cigars are packaged 16 per box.  They are expected to be on retailer shelves in August.