The Ortega Wild Bunch 2013 Fast Eddie Eight-Ball is the eighth installment in a monthly series of cigars developed by Ortega Premium Cigars.  The Ortega Wild Bunch 2013 series is a unique limited production cigar concept that was introduced by Ortega Premium Cigars.  The idea behind the Ortega Wild Bunch is to dedicate a cigar to various cigar enthusiasts whom company president Eddie Ortega has personally met during his time in the cigar industry. During 2013, each month a different cigar – in a different size and blend will be released as a tribute to these various people.  For the Fast Eddie, this tribute is a little different – as it is the eponymous entry representing Eddie Ortega himself.  I recently have had a chance to smoke this cigar.  Overall, I’ve been quite pleased with the Ortega Wild Bunch 2013 series as a whole – and the Fast Eddie continues to do it justice.

The Fast Eddie actually was intended to the the August 2013 release, but it was shipped very late in the month.  As a result, it arrived in retailers very early in September.

At press time, the following are the names confirmed for the Ortega Wild Bunch series.  Future names and releases have been subject to change throughout the year, but this is how the series currently stands.    We’ve been very proud at Cigar Coop to bring you timely assessments of each of those throughout 2013.  Currently the series looks as follows:
January: Big Bad John “Jackhammer”February: Iron Mike “I Beam”March: Island Jim “WaHoo”April: Tony The Boss “Enforcer”May: Dandy McCoy “Empire State”
June: Honest Abe “Ringmaster”July: Wild Bill “Cheroot”August: Fast Eddie “Eight Ball”
September: Gearhead Gary “Crankshaft”October: Warrior Joe
November: The Byrdman
December: Crazy Jack

Ortega chose to tie his character to the game of pool (which he is known to enjoy).  Each Ortega Wild Bunch character is described in the inner box cover.  For those who have met Ortega, this is a very appropriate characterization.


They should call him “Smiling Eddie” instead of fast.  Eddie seems to be having fun no matter what he’s doing, the way he figures, life is short might might as well enjoy.  Don’t let the smile fool you, although always with a smile on his face, he is a workaholic with a passion for the business at hand and puts great enthusiasm when it comes to creating each and every product for his loyal customer base.  Like Eddie says “life is good, enjoy”.


At a glance, let’s take a look at the Ortega Wild Bunch Fast Eddie Eight-Ball:

Blend Profile
The Fast Eddie becomes the first cigar in the Ortega Wild Bunch 2013 to use an Ecuadorian Sumatra wrapper:
Wrapper: Ecuadorian SumatraBinder: Not disclosedFiller: Not disclosed
Vitolas Available
The vitola is officially called the “Eight Ball”.  This cigar is a 6 1/2 x 38 lancero.  The lancero is a known favorite size of Ortega’s.  This lancero is smaller than a typical lancero.  Ortega used this same size on his Ortega Serie D Maduro Lancero.  The cigars are packaged 20 per box.

Appearance
The Fast Eddie Eight Ball’s wrapper has a milk chocolate coloring with a colorado red tint.  The wrapper has a slight velvety feel, but it also has some oil on it.  There are some visible veins and visible wrapper seams – some more noticeable than others.  Still, I wouldn’t describe this as an overly rugged lancero.  There is also a small pig-tail on the cap.
As with the other installments of the Ortega Wild Bunch 2013, the band of the Fast Eddie is highlighted by an illustration of the “Fast Eddie” character done by Neal Wollenberg. Wollenberg also did the art work for the boxes.

Preparation for the Cigar Experience
As I typically do with a cigar that has a pig-tail cap,  I went with a straight cut as opposed to pulling off the pig-tail.  Once the cap was removed, I moved on to the pre-light draw ritual.  On the cold draw I detected flavors of chocolate, cherry, and a slight touch of pepper.  Overall I considered the pre-light draw of the Fast Eddie to be satisfactory.  At this point, I was ready to light up this latest installment of the Ortega Wild Bunch and see what the cigar experience would have in-store.
Flavor Profile
Overall, I didn’t find the Fast Eddie to be a cigar that would undergo radical flavor transitions during the smoking experience.  I did find it to have a very nice set of flavors that meshed well together.
The start to the Fast Eddie had a combination of pepper and chocolate.  Both notes seemed to have equal contribution on the tongue, but I found the pepper notes to be more prominent on the after-draw and on the retro-hale.  Later in the first third, I found that the pepper notes transitioned to more of a baker’s spice.  The chocolate notes were still very much present.
In the second third, a creamy undertone emerged in the background.  This meshed very well with the chocolate and baker’s spice.  By the last third, the spice kicked it up a bit and returned to more of a classic black pepper.  The chocolate was a secondary note while the cream was now more of a tertiary flavor.  There was no harshness at the end.  The resulting nub was cool in temperature and soft to the touch.
Burn and Draw
The Fast Eddie Eight-Ball is a well-constructed lancero and this is reflected in the attributes of burn and draw.  From a burn perspective, the Fast Eddie Eight-Ball performed very well.  The burn line remained relatively straight – requiring few touch-ups along the way.  The resulting ash was a a light grayish ash with some dark speckling.  The ash held very firm along the way – with minimal flaking.  The burn rate and burn temperature were ideal. 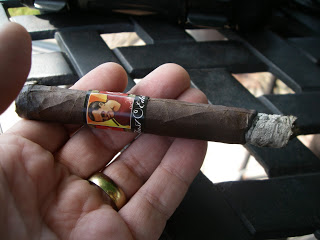 I found the Fast Eddie Eight-Ball to draw extremely well for a lancero.  While it had a touch of resistance, I considered this to be ideal.  Overall it did was not too tight for a lancero and it made for an enjoyable smoking experience.

From a strength perspective, the Fast Eddie Eight-Ball was not going to be a powerhouse.  I assessed this cigar as being a medium strength smoke.  As for the depth of the flavors, the Fast Eddie starts out in the medium-bodied range.  As the cigar experience progressed to the second half, the flavors moved into the medium to full-bodied range.  In the first half, the strength and body make an equal contribution, but in the second half it seemed as though the body had the edge.

If you have read the assessments I have done on the Ortega Wild Bunch, you will know that I think the Ortega Wild Bunch has been an enormous undertaking for Eddie Ortega and his company.  There is no doubt it has to be an incredible challenge to bring twelve different blends to market on a monthly basis. At the same time, the company has stepped up to this challenge and produced some great cigars along the way.  While not the most complex blend, I still found the Fast Eddie Eight-Ball to be a very enjoyable and flavorful cigar.  It’s the perfect cigar for either the novice or experienced cigar enthusiast.  As for myself, this is a cigar I definitely will smoke again and keep several of in my humidor.