It was a little over a year ago when Casa Fernandez launched the Aganorsa Leaf Maduro line at the 2012 IPCPR Trade Show.  Aganorsa tobacco refers to Nicaraguan-grown tobacco on farms owned by Aganorsa SA.  Many cigar manufacturers covet the tobacco grown on these farms.

Without further ado, let’s break down the Casa Fernandez Aganorsa Leaf Maduro Illustre and see what this cigar brings to the table:

Blend Profile
One key fact about the Casa Fernandez Aganorsa Leaf Maduro blend is that it also uses Corojo 99 tobacco in the blend.
Wrapper: San Andres MaduroBinder: Nicaraguan (Aganorsa)Filler: Nicaraguan (Aganorsa)Vitolas AvailableThe Casa Fernandez Aganorsa Leaf Maduro now has three frontmarks in the line.  Like the original two vitolas, the Illustre is a box-press.  All three sizes are sold in boxes of 15.

The Casa Fernandez Aganorsa Leaf Maduro Illustre’s wrapper has a milk chocolate color to it. There is not much in the way of oil on this wrapper. There are some visible wrapper seams but void of veins.  The box-press is well packed.

The secondary band has a red background with gold print.  On tha band, it says “Aganorsa Leaf” in gold cursive.  Below that band, it says “MADURO” – also in a smaller gold font.  There are also some gold leaves and gold striping that adorn the band.

The Casa Fernandez Aganorsa Leaf Maduro Illustre started out with a short blast of black pepper. The pepper subsided and was joined by notes of earth and chocolate.  The pepper established itself on the retro-hale early on and remained prominent in the nasal passages throughout the smoking experience.  By the five percent mark, a distant cherry note also surfaced.

As the Illustre moved toward the first third, the combination of earth and chocolate notes took center stage in the forefront.  The pepper was slightly behind these notes in terms of overall contribution to the flavor profile.  I also found the pepper had a lingering effect on the tongue.  The cherry notes remained distant and were more of a tertiary note.

In the second third, the earth notes began playing more of a prominent role.  The chocolate notes became secondary.  The pepper notes were still very close to being primary, but were not quite there.  The pepper also continued to linger on the tongue.  The cherry notes had pretty much dissipated early in the second half.

In the latter stages of the smoking experience, the flavor became more earthy and peppery. Overall, there was still good flavor right until the end.  There was virtually no harshness.  The resulting nub was cool in temper.

I found the Illustre to be a well-constructed cigar and felt that this was reflected in both the burn and draw of the cigar.  The burn line remained relatively straight from start to finish requiring only a few touch-ups along the way.  The ash was a charcoal gray color.  I did find the ash slightly loose at a couple of points during the cigar experience.  The burn rate and burn temperature were ideal. 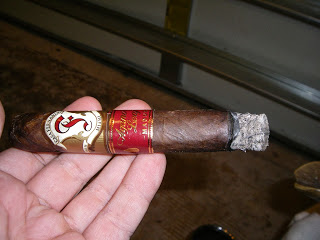 The draw performed very well.  I did not find the Illustre’s draw to be too loose or too tight – making for a very enjoyable cigar to puff on.

Compared to the other vitolas in this line, I found the smaller ring gauge to deliver some more intensity when it came to the strength and body of this cigar.   From a strength perspective, the Illustre had just enough to qualify it to be medium to full in my book.  As for the body, I found the Illustre delivered some depth in its flavor profile.  This qualified the Illustre to be a full-bodied cigar in my book.  When comparing strength versus body, I definitely gave the edge to the body.

While by no means was this an overpowering blend, however it is possible that since this is a newer release things could mellow somewhat (similar to the other vitolas).  Time will tell on that.

The 5 x 48 box-press format really helps the blend of the Aganorsa Leaf Maduro come together very nicely.  Many people know from a personal standpoint that I really do appreciate larger ring gauge cigars, but things work really well with the Illustre’s format.  One reason why I have said that Casa Fernandez is one of the industry leaders when it comes to San Andres Maduro is that their blends never overwhelm you with (what I consider the) the San Andres wrapper.  The Illustre is another fine example of their work with this wrapper.  Overall, I found this to be a great cigar to recommend to experienced cigar enthusiasts – especially those who appreciate a good maduro.  While it might have a little more kick for a novice enthusiast, I still would encourage one to try this – especially one looking to graduate to something stronger.  As for myself, this is a nice short smoke to keep in my humidor and one worthy of getting a five pack of.

Source:  The cigars for this assessment was provided by an authorized representative of Casa Fernandez Cigars.  The samples received were in order to provide feedback.  Cigar Coop is appreciative for the samples, but in no way does this influence this write-up.