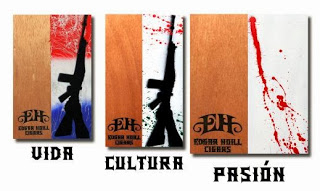 Edgar Hoill Cigars has officially announced they are releasing limited edition boxes for the three sizes of their EH line.  Each size of the EH line will have a unique hand-painted designed box.  According to Fabricas Unidas, the distribution arm for Edgar Hoill Cigars, the cigars will be only available for a limited time.  Initial news of the boxes first surfaced on a report by Tiki Bar Online back in September.

The EH Cigar line was the first line released by Edgar Hoill Cigar – the brand run by Edgar Hoill.   Hoill is best known as a photographer for his precision style that
became known as “One Shot One Kill”.  Hoill established a name in the
cigar industry in 2012 as he collaborated with Room 101’s Matt Booth on the limited release Room 101 OSOK (One Shot One Kill – named for Hoill’s style).  Late last year, Hoill moved over to Christian Eiroa’s company.

The EH is a Nicaraguan puro. The cigars feature uniquely design artesian vitolas.  The EH Pasion scored a 91 on Cigar Coop this past February.

At a glance, here is a review of the EH line:

Other than being Nicaraguan, no specific tobaccos have been disclosed on the EH.

The three artesian vitolas are shapes that you commonly would not find on a cigar.   These
cigars are all packaged ten per box.