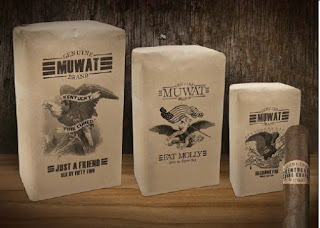 Drew Estate Chairman Jonathan Drew took to his instagram account to give an update on the status of the MUWAT Kentucky Fire Cured line.

In a written comment by Drew, he said the following:

“Cigars
are closer to their national release. I apologize for their numerous
push backs from their original planned date. … Please allow me to
explain the reason for its delay. KFCC is a pioneer brand to incorporate
a very special tobacco type, called “Dark Fire Cured”, which comes from
a special, proprietary tobacco seed, called KY190, Burley. After this
seed becomes a plant and is removed from the farm, the real magic takes
place – the barn curing. This curing process happens rapidly, under the
smoking of woods, such as Hickory and Maple – allowing this special leaf
to demonstrate a smoky and voluptuous character. The delays are do to
the high humidity level of the leaf (caused by special fertilizers) as
it blends with the traditional black air cured tobaccos … The Kentucky
Fire Cured has been aging in its special chamber and very close to
shipping from Nicaragua.”