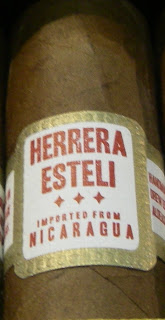 Drew Estate’s Herrera Esteli line, the line created by Willy Herrera will be adding a lancero vitola to its line.  The Herrera Esteli Lancero will become the sixth frontmark released in the line and will be positioned as more of a limited offering.  Information on this announcement was made in the December 3rd edition of the Cigar Insider.
The Herrera Esteli Lancero is a traditional lancero shape of 7 1/2 x 38.  According to the article, this lancero will not have a pig-tail cap.
The strategy to limiting production of a lancero line extension is similar to what Crowned Heads recently did with the Headley Grange Drumstick.  Lanceros have a very passionate following, but often this following has not translated to sales by retailers.
According to the article, the Herrera Esteli Lancero is targeted for release in the January/February 2014 time period.