The Brun del Re Gold is a multi-national blend with tobaccos from four countries.  Costa Rican tobacco is included in the filler.

For this cigar experience, I smoked the Brun del Re Gold in the Robusto format.  The Ecuadorian wrapper of the Brun del Re Gold has a light cocoa color to it.  I would categorize the wrapper as having more of a silky complexion than an oily one.  There are some visible veins and visible wrapper seams on the cigar.

The band features an black, gold, and white color scheme. There is a gold shield on the front of the band that rests on an black field.  The text “gold sits below the shield in gold cursive font. There is gold trim around the black field. To the left and right of the field is the text “Hecho a Mano Costa Rica” in white cursive font.  At the bottom of the band is an olive colored ribbon with the text “Brun del Re” in white cursive font.

Prior to lighting up my Brun del Re Gold, I went with a straight cut to remove the cap.  Once the cap was successfully clipped, I moved on to the pre-light draw.  The dry draw produced some nice flavors – a mix of cocoa, floral, and wood notes.  Overall I considered the pre-light draw experience of the Brun del Re Gold to be positive.  At this point I was ready to light up this cigar and see what the smoking phase would have in store.

The Brun del Re Gold started out with notes of floral and some cherry sweetness.  In the background notes of cocoa and pepper provided a nice complement to the primary notes.  On the retro-hale, I detected a sweet herbal retro-hale.

In the second half, the floral and cherry notes converged.  The pepper notes emerged in the forefront.  By the last third, the pepper took over as a primary note.  The Brun del Re Gold was spicy at the end and did exhibit a little bit of harshness at the end.  The resulting nub was soft to the touch and cool in temperature.

The burn scored very well on the Brun del Re Gold.  The burn line remained sharp from start to finish requiring minimal touch-ups.  During the first half, the ash was tight with a bright white color to it.  In the second half, I did get some minor flaking from the ash, but nothing major.  The burn rate and burn temperature were ideal. 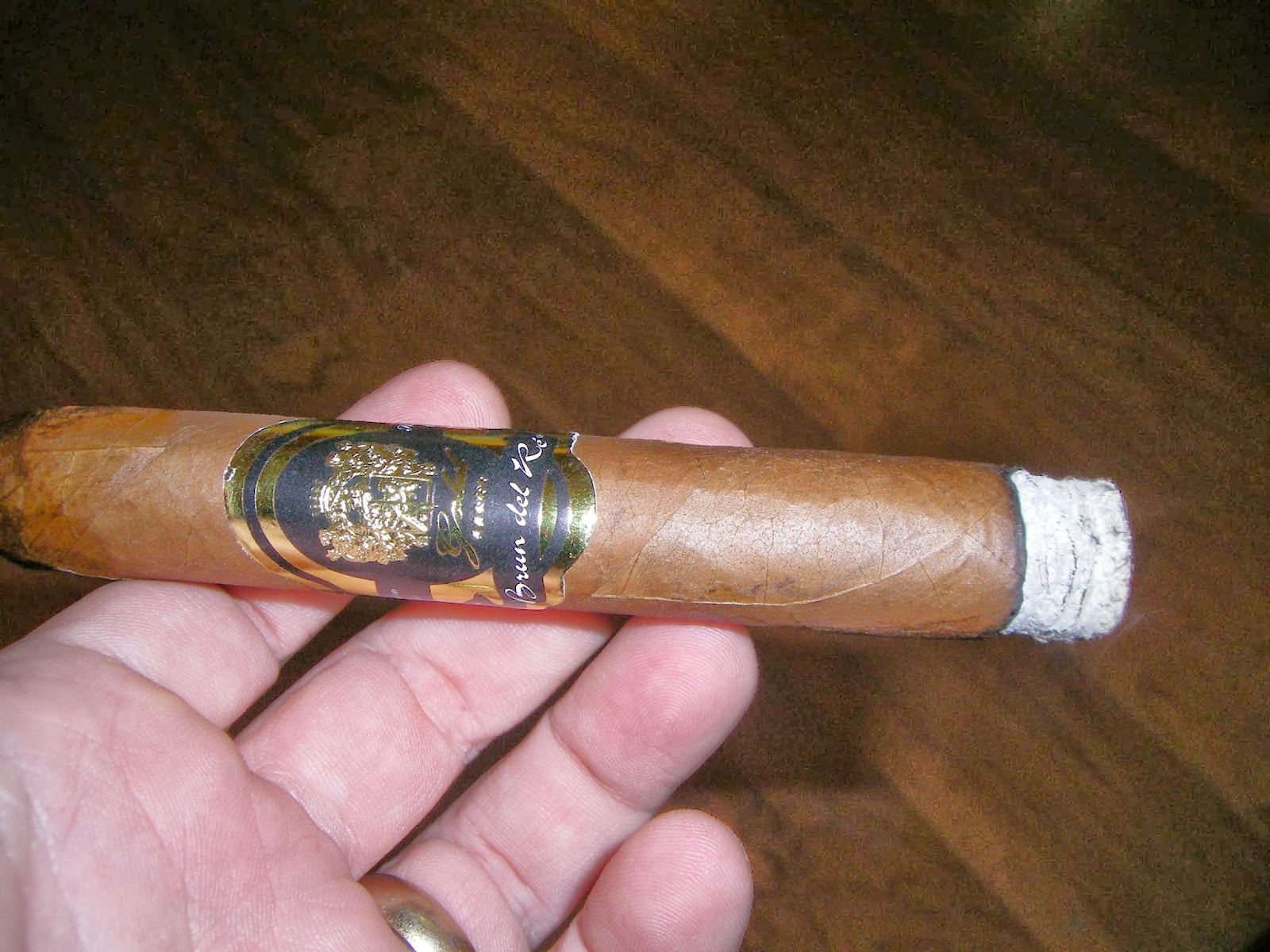 Burn of the Brun del Re Gold

The draw was excellent as well.  It was not too tight and not too loose.  This made for an enjoyable smoking experience from start to finish.

This is the second cigar I smoked in the Brun del Re series.  The other one I had smoked was the Brun del Re Premium.  The Premium was a milder cigar in both strength and body.  I will admit from a flavor standpoint I still prefer the Premium to the Gold.  This isn’t a knock on the Gold as it still has some nice flavors – it’s just I think the Premium had better flavor.  At the same time, I did like the fact that the Gold offered more in terms of strength and body.  This still isn’t going to be an overpowering cigar in terms of strength and body, but it provides just enough for this blend. This is a cigar I would easily recommend to a novice cigar enthusiast.  As for experienced cigar enthusiasts, if they want something that averages in the medium range, this is something they may want to try.  As for myself, this is one I recommend cigar enthusiasts give this a try or keep a couple in a humidor.

* Cigars for this assessment were provided by a representative of Brun del Re Cigars. The samples were received in order to provide feedback.  Cigar Coop is appreciative for the samples, but in no way does this influence this write-up.