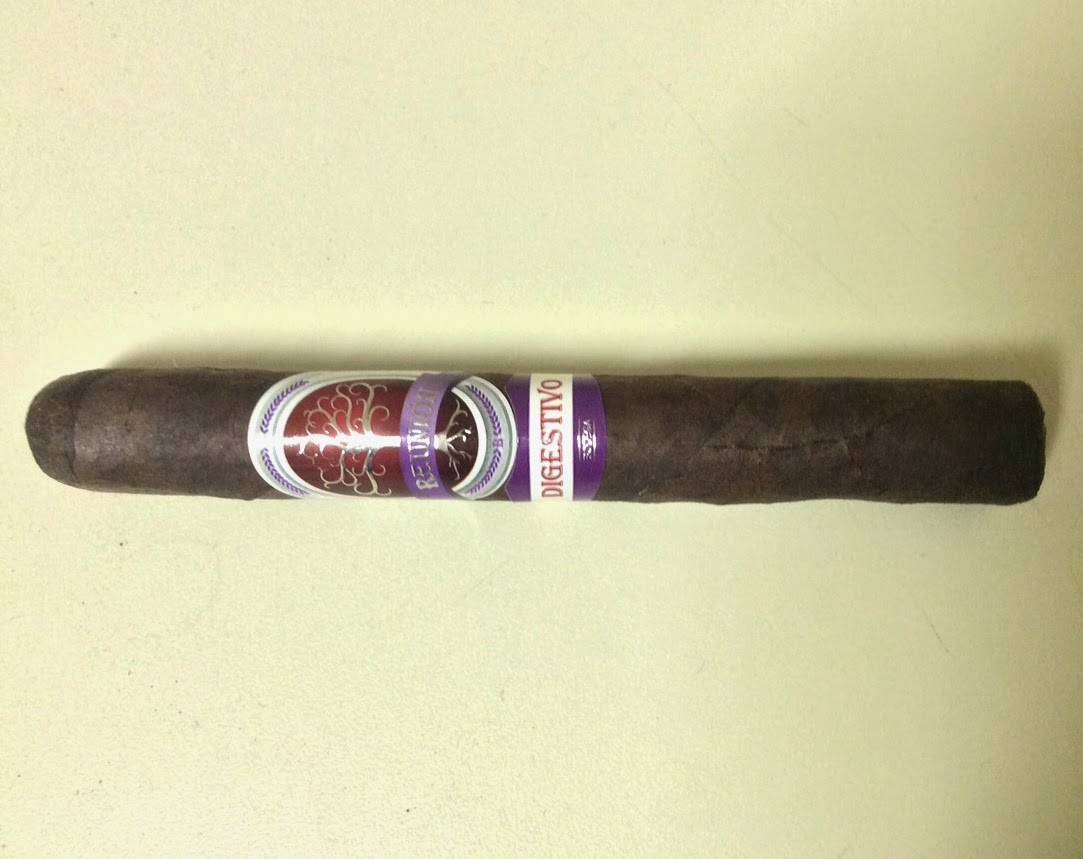 The Reunion Digestivo is one of two cigars launched by Bodega Premium Blends.  It was at the 2013 IPCPR Trade Show where Gary Griffith made an announcement that he was adding an eighth blend to his House of Emilio distribution arm.  With the case of Bodega Premium Blends, the company was sort of an unknown – namely the company had not released any product as of yet.  Fast forward to December, 2013 and Bodega Premium Blends announced the Reunion line.  This would consist of a Habano blend called Reunion Aperitivo and a Maduro called Reunion Digestivo.  The catch is that both blends would be packaged together in a single box offering.  Recently, I’ve had an opportunity to smoke the Reunion Digestivo.  Overall I found this cigar to be a solid offering by this newcomer to the block.

Bodega Premium Blends is run by Gino Domanico.  The Reunion line has a theme based around fellowship – gathering, connectedness and friendship.  Both the Aperitivo and Digestivo blends are packaged together ten per box in 20 count boxes. Both of the blends are made in Nicaragua.

According to the company web-site the Digestivo was “was inspired by the culinary arts (like the Apertivio). Spanish for digestif, Digestivo usually refers to: “a cocktail or other alcoholic beverage that is specifically served after a meal. The purpose of a digestif is to aid in the digestion following a meal.  Spirits such as port, brandy, cognac and whisky are examples of traditional digestifs. And as Bodega Premium Blends would have it, not only does its Digestivo pair extraordinarily well with those drinks, there’s nothing finer in the humidor to finish off a meal…Digestivo is designed to bring the whole experience to a satisfying conclusion.”

Without further ado, let’s take a closer look at the Reunion Digestivo and see what this cigar brings to the table:

The cigar is being launched in three sizes that are common to both the Digestivo and Apeirtivo blends.

For this cigar experience of the Reunion Digestivo I went with the Corona Gorda size. The Digestivo had a darker coffee bean colored wrapper with some darker marbling. When the light shines on it from certain angles, you can see some colorado red. There is a light oily sheen on the wrapper, yet like many San Andres wrappers it has a rough feel. There are some visible veins, but many of the wrapper seams are well hidden. This was definitely one of the nicer looking San Andres wrappers I have seen.

The primary band features a silver tree on a burnt red background. There is a white oval that surrounds the red background with some purple adornments on it. Across the lower part of the tree is a purple ribbon that drapes over the white border. On that ribbon is the text “REUNION” in silver font. Going around the rest of the band is purple and silver color.

The secondary band sits just below the oval shaped bottom of the primary band. The text “DIGESTIVO” is in a rose-colored font sitting on a white background surrounded by purple. On the lower part of the band sitting on on purple trim is the BODEGA PREMIUM BLENDS logo in silver.

The start to the Reunion Digestivo provided a nice shot of white pepper (the pepper was definitely more defined once I lit up this cigar). Some notes of coffee soon emerged. As the Digestivo moved through the early phases the coffee moved into more of a primary note. There was a nice sweetness that surfaced. Meanwhile the white pepper notes receded to the background. I also detected a mild grass note – which was a distant tertiary flavor.

By the last third, I found a cigar that had more of an earth and white pepper flavor. As the cigar experience came to a close, the Digestivo still was flavorful. While there was spice, it was not harsh. The resulting nub was cool in temperature, but soft to the touch.

For the most part, the Reunion Digestivo had a straight burn line. It did require some touch-ups along the way, but not an excessive amount. The resulting ash had a salt and pepper color. The ash itself was what I would term “firm minus” – meaning it wasn’t overly tight, but there was no significant flaking or flowering. The burn rate and burn temperature were ideal. 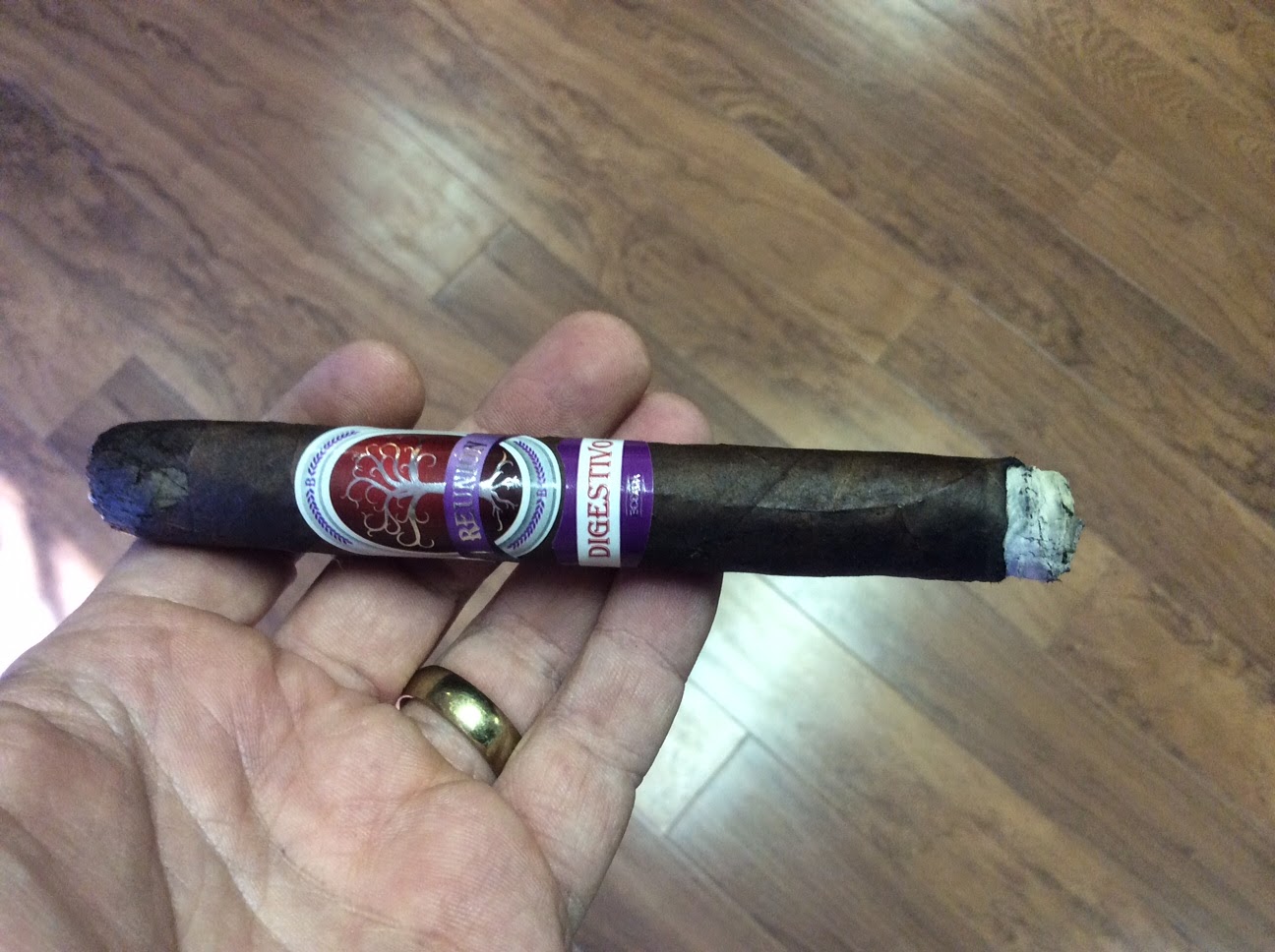 The draw was close to “middle of the road”. It wasn’t tight, yet it wasn’t too loose. The important point is that this was a low maintenance cigar to puff on and it made tasting the flavors enjoyable.

When comparing this to an after-dinner drink, I totally get it. This is not a cigar that is going to be “too much”, yet it is going to have enough zip to keep you satisfied after that nice meal. I tend to be critical of San Andres wrappers because there are many times (moreso) it can overwhelm the blend. The San Andres wrapper of the Digestivo will not overpower the cigar, but at the same time you will still taste its influence. Namely, I think this can satisfy many fans of this type of wrapper. While this wasn’t a “young” cigar, my gut tells me age will be kind to this blend. Since this cigar does not overpower, I can easily recommend this one to either a novice or experienced cigar enthusiast. Overall, I found the Digestivo to be a great initial offering by Bodega Premium Blends. It’s a cigar I’d smoke again – and certainly look at a five pack of.

* The cigar for this assessment was given to Cigar Coop by Bodega Premium Blends and House of Emilio. Cigar Coop is appreciative for the sample, but this does not influence the review.

« Cigar News: FDA To Ask for Public Comment on Premium Cigar Exemption from Regulation » Cigar News: Cigar Association of America to Continue to Work Closely with FDA in Light of Pending Regulations