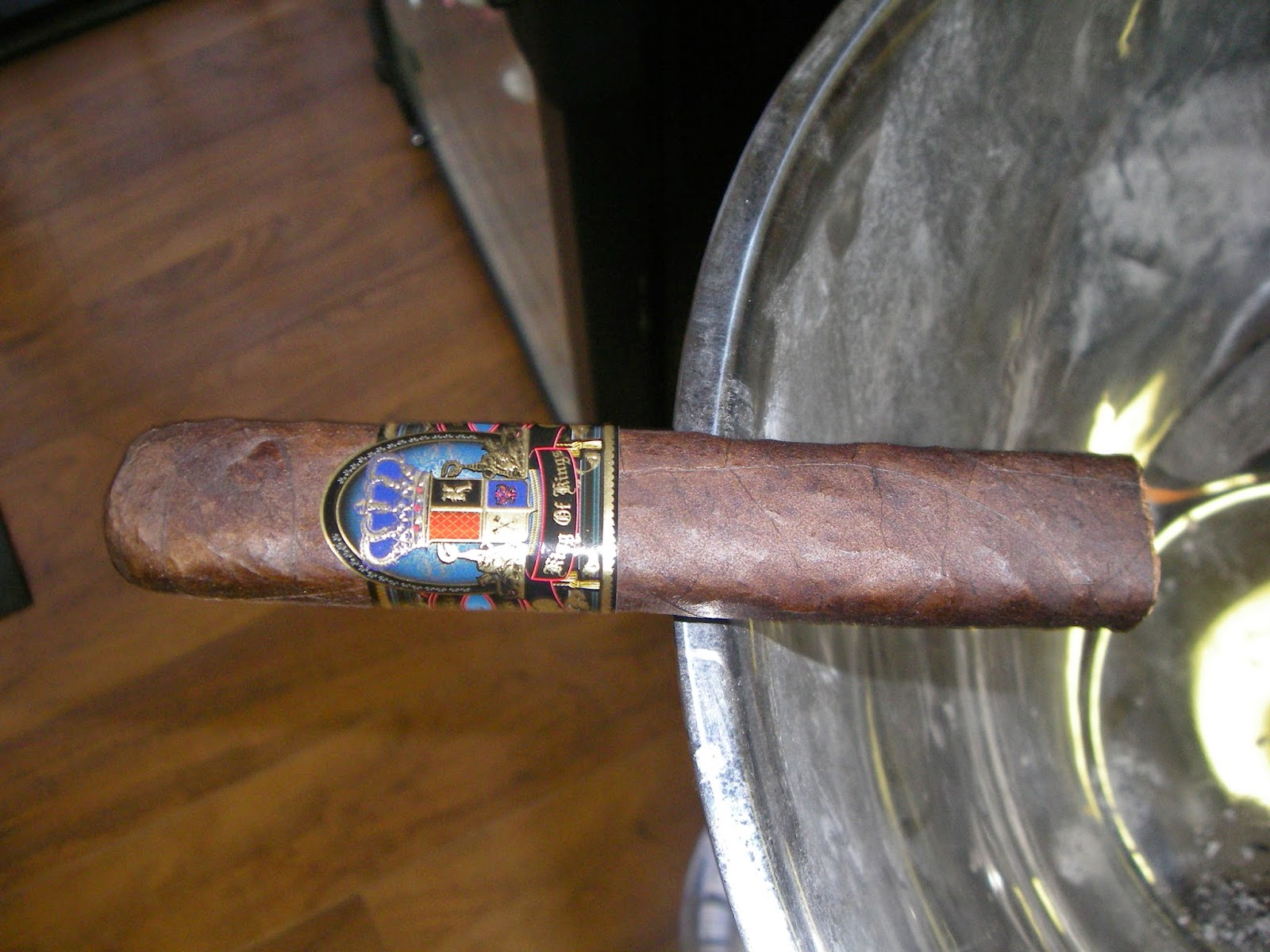 With our further ado, lets take a closer look at the King of Kings Broadleaf and see what this cigar brings to the table:

The King of Kings Broadleaf has a chocolate bar colored wrapper.  There is a light amount of oil on the surface.  The darker color of the wrapper does a decent job at hiding both the wrapper seams and veins of this cigar.  The box-press had a nice firm pack – with no soft or under filled spots.

The band has a gold, red, blue, and black color scheme.  It is highlighted by a crown resting above a coat or arms.  There are some gold leaves and medallions to the left and right – as well as some red and blue design. The text “King of Kings” is in gold font on a black ribbon with red trim. It is located below the coat of arms.

Prior to my cigar experience, I went with my usual choice of a straight cut to remove the cap. Despite this large ring gauge, the box-press narrowed the size of the cap and my normal straight cut still worked effectively. After clipping the cap, the dry draw treated me to a mix of chocolate, earth, and floral spice notes. Overall I was pleased with the pre-light draw of the King of Kings Broadleaf. At this point I was ready to light up this cigar and see what the smoking phase would bring to the table.

The start of the King of Kings Broadleaf provided a decent blast of white pepper.  It didn’t take long for notes of earth and bittersweet chocolate to enter the equation.  These flavors became rich rather quickly and moved even with the pepper.  I also picked up the white pepper notes prominently on the retro-hale.

Later in the first third, the bittersweet chocolate and earth notes were the primary flavors.  There were also some coffee notes that had entered the equation.  I found the pepper notes to now be more prominent on both the after-draw and retro-hale.

As the King of Kings Broadleaf entered the second half, I saw the primary notes become more earthy.  The chocolate and coffee notes were still present, but definitely in the background,  The pepper notes had increased and were also now more present toward the forefront.  For the most part, I found this the way the cigar’s profile held until the end.

From a burn perspective, I did find that the King of Kings Broadleaf needed several touch-ups along the way to keep a straight line.  While the cigar needed more touch-ups than I prefer, it still was not in danger of tunneling or canoeing.  The resulting ash was mostly firm, there were a few points where I did have some flaking.  For the most part the ash had a salt and pepper color on the lighter side.  The burn rate and burn temperature were ideal.

The draw was very good – it wasn’t too tight and it wasn’t too loose.  For a large ring gauge cigar, I didn’t find this a very uncomfortable cigar to smoke.

For the most part I found the King of Kings Broadleaf to have some boldness and robustness. From a strength standpoint, I found this cigar to in the medium to full range. As for the flavors, they definitely had some depth and weighed nicely on the pallet. I assessed this cigar as being medium to full-bodied, but by the last third, the King of Kings Broadleaf was smoking full-bodied. For the most part, I found the strength and body countered each other nicely, but toward the end I felt the flavor had a slight edge.

Overall this was a solid smoke by Kings Cigars.  I had enjoyed the King of Kings Habano.  In the case of the King of Kings Broadleaf, I liked this cigar even better.  Like the Habano, I felt that this was a blend that specifically geared toward the large ring gauge – and that’s why it worked.  A lot of times many cigar connoisseurs will immediately dismiss a large ring gauge, but they do sell.  The King of Kings Broadleaf with the King of Kings Habano gives the company a nice 1-2 punch for fans of the big ring gauge.  This is a cigar that I would recommend to the experienced, large ring gauge cigar enthusiast.  While it has a little more strength than I’d give to a novice, I certainly wouldn’t discourage a novice from trying.  As for myself, this was an enjoyable cigar.  It’s one I’d certainly pick up a fiver and smoke from time to time.

* The cigar for this assessment was given to Cigar Coop by General Cigar Company.  Cigar Coop is appreciative for the sample, but this does not influence the review.

« Cigar News: Cigar Association of America to Continue to Work Closely with FDA in Light of Pending Regulations » Feature Story: How Will a Premium Cigar Be Defined in the Eyes of the FDA?