Before we get into this – a disclaimer: This is not an April Fool’s post – even though the company name is made up.  This month I opted to put a headline to illustrate something you probably won’t ever see on Cigar Coop and Stogie Geeks – “(Insert Company or Brand Here) Teases New Release”.

If you follow the cigar industry, you are bombarded with this stuff on almost a daily basis. They are called teasers. Basically what it usually consists of is a photo with a lack of, or in some cases no information. It’s meant to “tease” but create some interest in a project the company is coming out with.  It’s a marketing technique plain and simple.

Several months ago, we made a decision to not cover teasers on Cigar Coop. Our approach and philosophy is to take more of a journalistic point of view of things. Over this period, I’ve come to one conclusion – teasers make for lousy journalism. In this author’s mind, it’s even a questionable and often ineffective marketing technique used by the cigar industry.

The Aim of Teasers on the Media Landscape

Before we tackle why teasers make lousy journalism, let’s take a look at the media landscape. This is important because it does explain some our rationale. The diagram below illustrates various mediums. On the left side you have those social media conduits like Twitter, Instagram, and Facebook. These are mediums that are effective at getting information out quickly. With those mediums, details are often more limited. On the right side, you have traditional print media – more focused on detail, but speed is traded off. The cigar industry is great at dealing with those social media conduits on the left – and print media on the right. 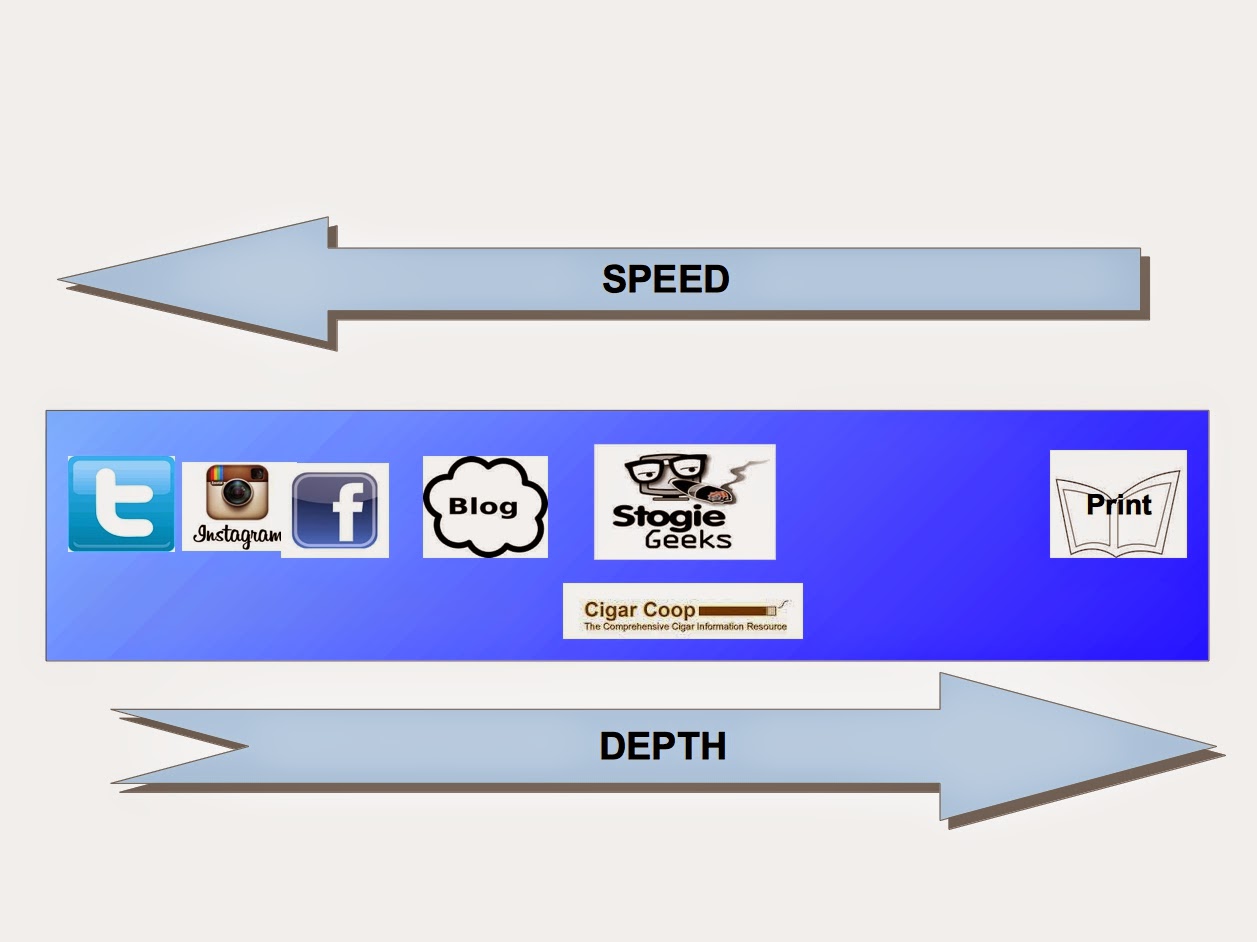 Just to the left of the middle, you have the traditional blogs. We consider ourselves a little more to the right, since our brands go a little deeper than many, but that isn’t meant to say we are superior or inferior. We’ve found the cigar industry still struggles with how to work with that middle zone of online media. Many times we are lumped in with the conduits on the left because our medium is “online” as opposed to paper, so online media is subject to the same marketing techniques – including teasers.

The three social media conduits, Twitter, Instagram, and Facebook have become natural habitats for the “teasers”. Teasers don’t work further to the right effectively. Information gets put out there, however it causes nothing more than frustration for those who are further to the right on the spectrum.  It’s just not possible to craft an article when the depth isn’t there.

Cigar brands need to keep the teaser a teaser for while -i.e. don’t spill the beans right away

Perhaps, the most frustrating thing is the immediate follow-up with the teaser. And within minutes a game commences, several media outlets will contact the manufacturer for more information – after all, that’s the job of a journalist.  At times, I’ve seen 30 minutes go by between a teaser and then a full-blown article revealing the teaser. When this practice happens, it led me to a few thoughts:

A couple of good examples

This might shock many, but perhaps the person / company that has best used teasers is Andre Farkas of Viaje.  Sometimes there might be an early teaser, but the beans are never spilled. Eventually some final information goes up on social media – along with some information.  It isn’t the most detailed information, but there is enough for a story, and Farkas has always responded if something needs clarification – and doesn’t “leak” more information.General Cigar Company recently announced a new cigar called the Punch Signature. They put an early set of teasers out. Following that, they slowly provided information of the media. I admit, it wasn’t the best way to report on a product release, but I gave them credit for allowing a teaser to run its course.

Why we won’t report on a teaser

There are some teasers where the beans are not spilled, yet I’ve seen media sources attempt to translate it to journalism.  I recently saw an article very similar to the following:

The Citobacar Tobacco Company put a picture on Twitter of a new logo. It could be a new cigar release, but we really don’t know much about it. The band had what appeared to be a motorboat logo, but it might have been a submarine logo. We aren’t sure. We don’t have any more information at this time, but stay tuned!”

In fairness, this could be a great way to gauge interest with Citobacar, but there isn’t really a story here just yet. It’s just a lot of guessing. We’d prefer to just see it on social media and then keep it on our radar until the story develops.

For these reasons, we at Cigar Coop do not report on teasers and we are very judicious with how we expend our resources chasing down this stuff. We’d rather trade off the “speed” for “depth” as indicated on the media landscape.

If teasers have a place, it’s nothing more than a marketing tool and should not be a media substitute. While I’d rather see a more formal announcement through a press release, this creates a whole new set of problems. Next month, I’ll drive into that piece – and the beans won’t be spilled before that.