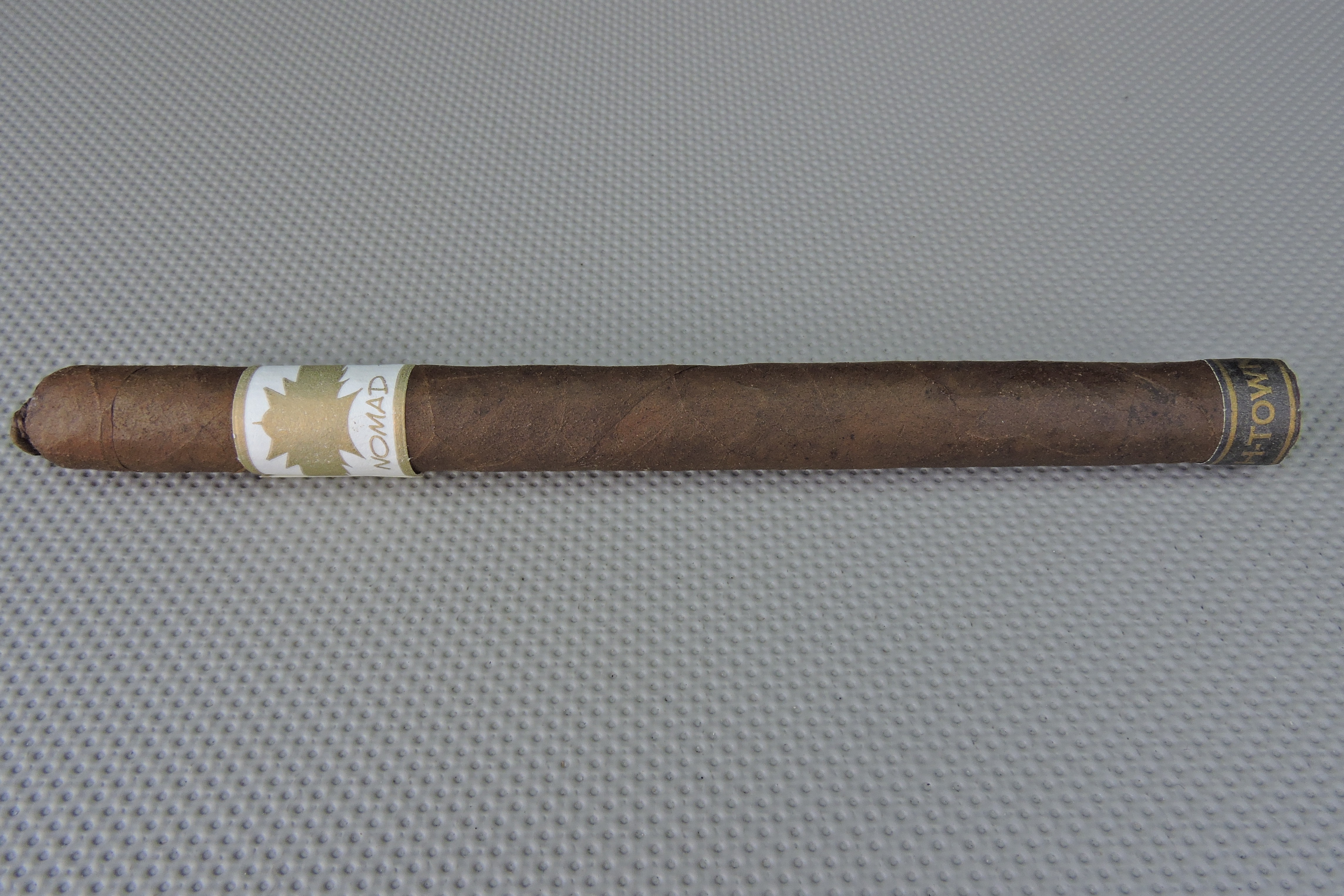 The Nomad H-Town San Andres Lancero is a shop exclusive cigar from Nomad Cigar Company for Stogies World Class cigars in Houston, Texas. It is the eighth installment in Stogies’ H-Town series. The H-Town series is quite unique in that it is comprised entirely of lancero vitolas. Stogies owner Jorge Ahued has partnered with leading cigar brand owners to offer exclusive lancero cigars for his shop. In some cases, the lancero is a line extension to an existing brand. In other cases, as with Nomad Cigar Company it is an entirely new blend. For Nomad founder Fred Rewey, the release is significant because not only is it his first shop exclusive, but it is his first foray into using a San Andres wrapper. Recently I’ve had an opportunity to smoke the Nomad H-Town San Andres Lancero. Overall, this is a cigar that should satisfy lancero fans while delivering a cigar experience that isn’t your “cookie cutter” San Andres smoke.

At press time, the H-Town series consists of nine cigars. The series was launched late in 2013 with the Room 101 Namakubi Ecuador H-Town Lancero. This was followed up by the Alec Bradley Nica Puro H-Town Lancero. It was in 2015 when the series grew as the remaining seven cigars were unveiled. For completeness, we list them below.

*  Denotes details for this cigar can be found on our friends at Toasted Foot.

One final note, this cigar assessment is based on a single cigar smoking experience. At a glance, here is a closer look at the Nomad H-Town San Andres Lancero:

In addition to the San Andres wrapper, the cigar incorporates a Dominican binder and a combination of Dominican and Nicaraguan filler. While more recently, Nomad has focused much of its new releases out of Nicaragua, the Nomad H-Town San Andres Lancero is produced in the Dominican Republic at Tabacalera L&V.

The San Andres wrapper to the Nomad H-Town has a chocolate brown color to it. Upon closer examination, some darker marbling can be seen on the surface. There is a coat of natural oil present on the wrapper. I also found the wrapper to be somewhat bumpy with some visible veins. The bumpiness gave this cigar some charm. At the same time, the dark color of the wrapper does a nice job at hiding the wrapper seams.

There are two bands on the Nomad H-Town San Andres Lancero. The primary band follows the design that was introduced with the Nomad Therapy line. The band is white in color. On the center of the band is a gold-colored Nomad “winged” logo. Below it is the text “NOMAD” in a gold colored font with a slight handwritten effect to it. On the far right is the text “NOMAD CIGAR COMPANY @GODFADR” – also in gold font. @GODFADR represents Rewey’s Twitter handle. Finally there is a thick gold stripe across the top and bottom of the band.

There is also a secondary band. It is black in color with gold stripes near the top and bottom. The band features the Stogies World Class logo and the text “H-Town”.

As opposed to pulling off the pig-tail cap of the Nomad H-Town San Andres Lancero, I opted to use a straight cut and remove the entire cap including the pig-tail. Once the cap was removed, I moved on to the pre-light draw. The dry draw delivered a mix of earth, cedar, classic wood, and some floral notes. Overall I considered this to be a satisfactory pre-light draw experience. At this point I removed the footer band, lit up my Nomad H-Town San Andres Lancero and moved on to the smoking phase.

The Nomad H-Town San Andres Lancero started out with notes of coffee, cedar, red pepper, and floral notes. Early on the coffee notes developed some richness and moved into the forefront early on. The cedar and red pepper became secondary notes while the floral notes quickly dissipated. While the red pepper and cedar were in the background on the tongue, I found they were more prominent on the retro-hale.

As the Nomad H-Town moved through the first third, I found the cedar notes morphed to a more traditional wood note. The wood moved into the forefront and alternated with the coffee notes in terms of intensity. Meanwhile the red pepper notes remained in the background.

During the second third, the coffee notes developed a slight bitter component to it. The wood notes remained in the forefront and by the midway point, they start to transform back into more of a cedar note. The red pepper remained in the background.

By the last third of the Nomad H-Town, the cedar and the coffee notes remained in the forefront. The coffee notes still had a slightly bitter component to it. The red pepper had slightly increased, but was still a secondary note. The resulting nub was cool in temperature, but slightly soft to the touch.

When it comes to construction, I’ve said it many times, it is hard to match the track record that Nomad has accomplished. This excellent construction has led to burns and draws that score very well –   and the Nomad H-Town is no exception. This cigar maintained a straight burn path and a sharp burn line throughout the smoking experience. I found this cigar needed less than an average amount of touch-ups. The ash had a bright white color. It was a tight, firm ash that came off the cigar in nice clean chunks.  As for the the burn rate and burn temperature, both attributes were ideal. Given the burn performed so well on the Nomad H-Town, this cigar earned the Cigar Coop “Exceptional” (highest) rating for burn. 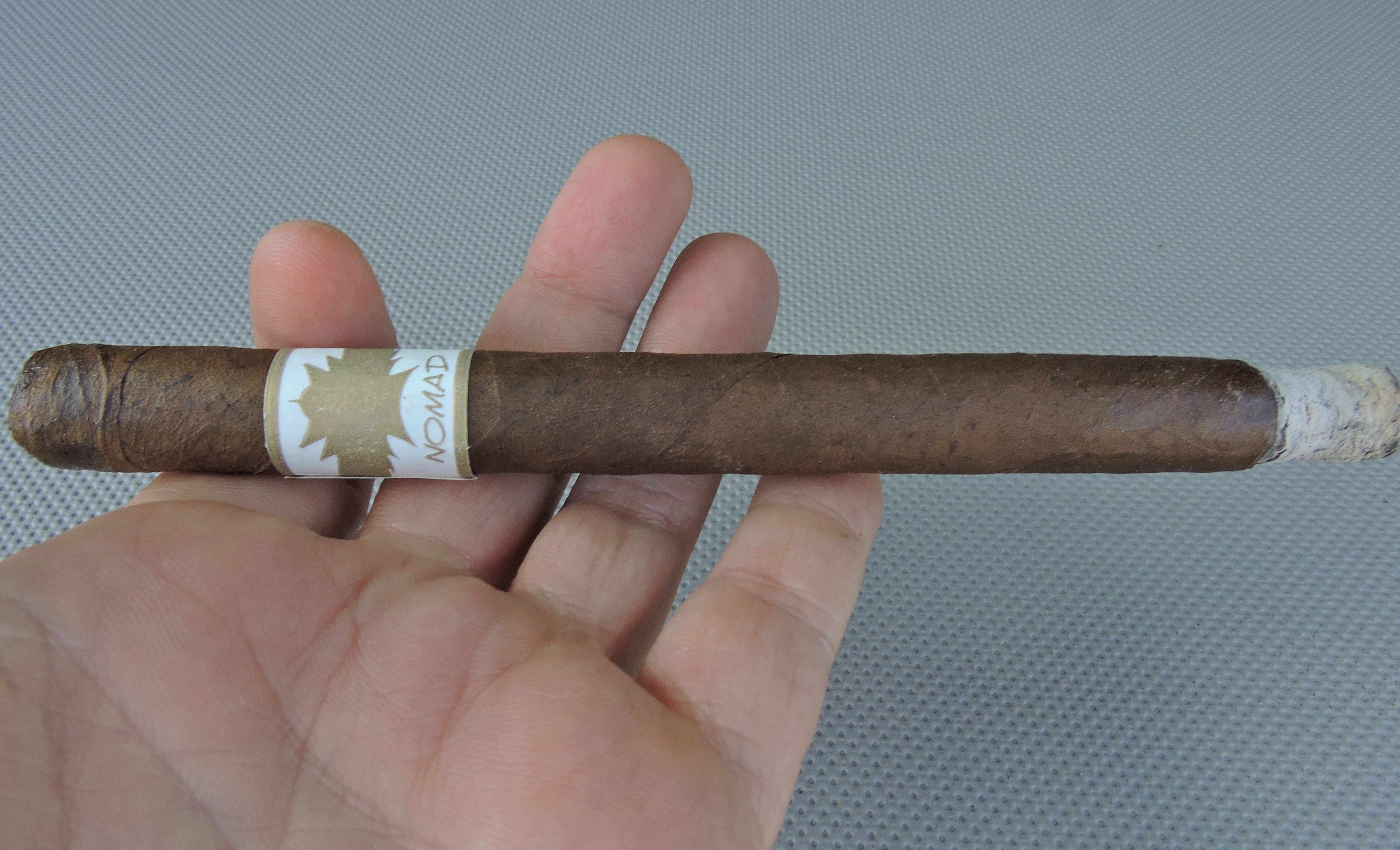 I also found the Nomad H-Town to have an ideal draw. There was a slight bit of resistance – which is something I like. Sometimes resistance on draw can work against you with a lancero, but with the Nomad H-Town, I found it to be a near perfect draw.

From a strength perspective, I found the Nomad H-Town to be medium. I didn’t find much variance in terms of the strength as the cigar experience progressed. Meanwhile the body of the Nomad H-Town also started out in the medium range. Toward the last third, the body increased and moved into medium to full territory.

As I said at the beginning, this is a cigar that will appeal to lancero enthusiasts and delivers a smoke that is not your “cookie cutter” San Andres cigar experience. The uniqueness of this cigar was the way the various notes of this cigar all worked together. This was something nice to see in a shop exclusive. As I have said in other reviews,  San Andres is a wrapper that can sometimes overpower a blend, but no such problem with this blend. The only drawback to this cigar was some of the bitterness that this cigar had. It’s a cigar I can recommend to either an experienced cigar enthusiast as well as a novice looking for a smoke in the medium to medium plus range. As for myself, this is a cigar that has nice value ($8.50), and it’s a cigar worthy of picking up a fiver.