Alpha Cigar Company just completed its second IPCPR Trade Show – and it’s a company that many folks are taking notice of.

The heart and soul of the company is Alpha’s Absinthe Infused line – consisting of three blends: Connecticut Shade, San Andres Maduro, and San Andres Claro. As the name indicates, this line is infused with a spirit known as absinthe. Absinthe is a highly alcoholic beverage that is distilled with herbs and botanicals. The name “absinthe” comes from Artemisia absinthium, the scientific name for its key ingredient, wormwood. Absinthe has garnered popularity in France. In particular, the Alpha Absinthe Infused line utilizes a French absinthe known as La Maison Fontaine. Alpha Cigar Company describes its cigar infusion process as a light infusion where the infusion is applied only to the binder leaf.

This year, the company also launched its Édition New Orleans line. New Orleans is known as the absinthe capital of the United States. It’s a cigar that is also Ecuadorian Connecticut, San Andres Maduro, and San Andres Claro wrapper options over a Olor Dominicano binder, and undisclosed fillers. It also features The Alpha’s proprietary blend of absinthe applied to the binder. The Édition New Orleans is sold in bundles available in one size – a  half-corona which measures 3 1/2 x 46.  As for the profile of this line, Alpha kept the details close to the vest. 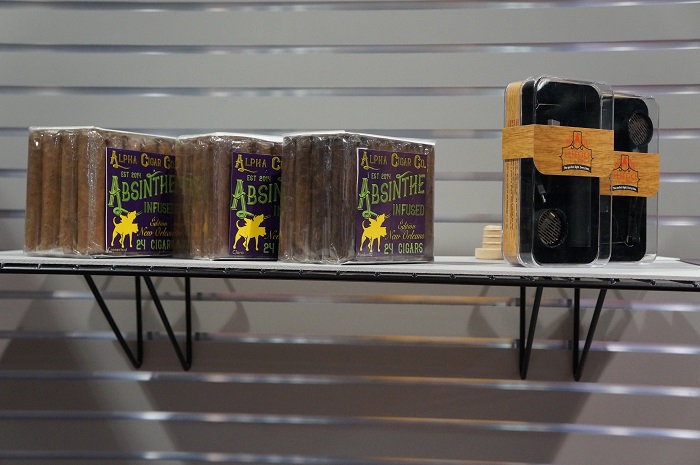 The company also showcased the Fuego Lighter. This is an accessory that the company is distributing. It is a butane-free flameless lighter that uses a battery-powered USB charger.

Finally, the company also makes a line of traditional cigars known as the Defuser. It is available in San Andres Maduro and San Andres Claro. This is the same blend as the Alpha Absinthe Infused line, but without the infusion incorporated into the blend. The company works with Abe Flores’ to produce its cigars.

A few days after the IPCPR Trade Show concluded, we interviewed Tim Cavenagh and Justin Mathson Hansen of Alpha Cigar Company on Episode 14 of the Prime Time Show.