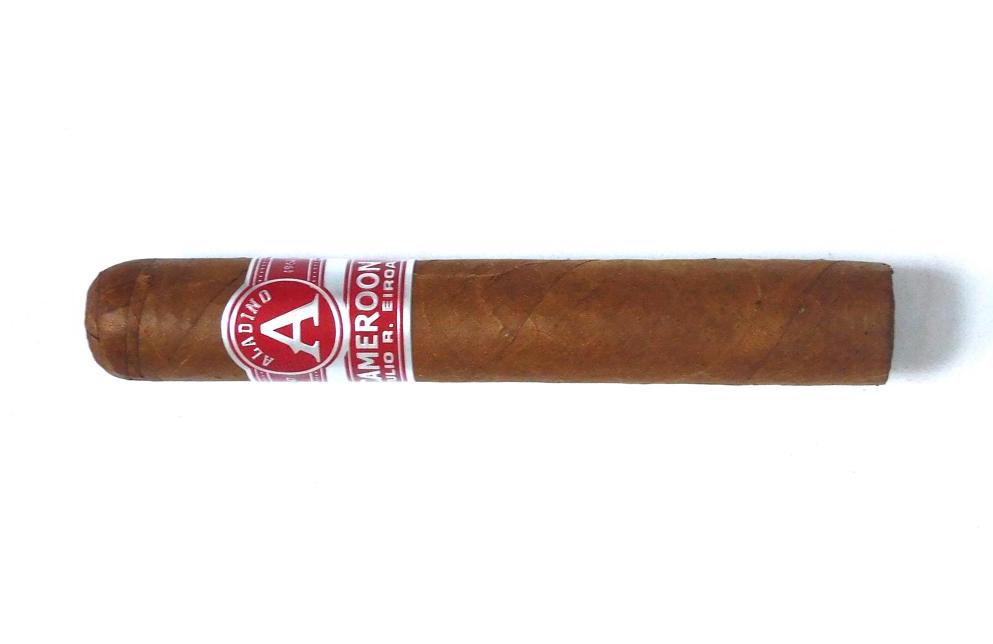 In 2020, JRE Tobacco Company would release the Aladino Cameroon. Cameroon wrapper has certainly gotten its share of attention over the past couple of years. When it comes to bringing Cameroon wrapper out of Africa, it’s the Meerapfel family that has been the main player in that market. At the same time, many others have worked to grow the Cameroon seed in several other countries. There have been Cameroon seeds grown in countries such as Mexico, Ecuador, and Honduras. JRE Tobacco Company founder Julio R. Eiroa is known as a farmer at heart, and when he owned Camacho Cigars he worked with an African Cameroon wrapper on the Camacho Select. Eventually, he took on the challenge of growing the Cameroon seed in Honduras and eventually was able to cultivate a leaf that could be used on a blend. That blend would be the Aladino Cameroon. It’s a cigar we will take a look at in the Robusto size.

The Aladino name is something traced back to the 1970s. There was a historic movie theater in Danlí, Honduras known as El Cine Aladino. This theater was operated by Christian and Justo Eiroa’s grandfather. Today, Christian owns the Aladino factory, which is in the theater’s former location. Aladino is also the name that company patriarch Julio R. Eiroa chose to name one of his brands. It is also on the name of Julio’s Las Lomas factory. When Aladino was launched, this was a brand positioned as delivering a classic, “old-fashioned” cigar experience reminiscent of those during the “golden age” between 1947 and 1961. Since then it has become the workhorse brand for JRE Tobacco, growing to six blends, one of which is the Aladino Cameroon.

Without further ado, let’s break down the Aladino Cameroon Robusto and see what this cigar brings to the table.

In addition to the Honduran Grown Cameroon wrapper, the remainder of the blend contains Authentic Corojo grown at the JRE Tobacco Farm. Production is handled at Julio Eiroa’s Las Lomas factory located adjacent to the farm.

The Aladino Cameroon was released in three sizes. Each is presented in 24-count boxes

The Cameroon wrapper of the Aladino Cameroon Robusto had a butterscotch color to it with a slight rosado tint to it. This was a slightly toothy wrapper and didn’t have much in the way of oils on it. There were some visible veins and visible wrapper seams, yet the wrapper still was pristine and had an elegance to it.

Prior to lighting up the Aladino Cameroon Robusto, a straight cut was used to remove the cap from the head of the cigar. Once the cap was removed, it was on to the pre-light draw ritual. The cold draw delivered notes of sweet natural tobacco as well as subtle black pepper and cedar notes. I found the pre-light experience was a satisfactory one. At this point, it was time to light up the Aladino Cameroon Robusto and see what the smoking phase would deliver.

The Aladino Cameroon Robusto opened up with notes of natural tobacco, caramel, apple, bakers spice, and cedar. Early on, the natural tobacco notes and apple sweetness moved into the forefront. The remainder of the flavors settled in the background. While some of the flavors read like a dessert menu, the natural tobacco grounded this influence making this cigar smoke like a cigar. Toward the latter part of the first third, there was some black pepper that emerged on the tongue. Meanwhile, the retro-hale delivered additional notes of black pepper, wood, and apple sweetness.

During the second third of the Aladino Cameroon Robusto, some earth notes emerged in the forefront and displaced the apple notes. The natural tobacco notes remained in the forefront. Overall there was a decrease in the sweetness of this cigar. While both the apple and caramel notes diminished, they still provided complementary flavors in the background. Meanwhile, notes of bakers spice, cedar, and pepper were also present in the background and helped balance out the sweetness. Later in the second third, there was an increase in the pepper notes.

There wasn’t much change in the last third. The natural tobacco and earth remained primary. The black pepper, caramel, apple, bakers spice, and cedar rounded out the flavor profile. The pepper notes were more prominent at this time than any other point of the smoking experience, but it was by no means overpowering. This is the way the Aladino Cameroon Robusto came to a close. The resulting nub was firm to the touch and cool in temperature.

The burn of the Aladino Cameroon Robusto performed quite well. It maintained a straight burn path. There was a touch of jaggedness on the burn line, but in general, this was a relatively straight burn line. The resulting ash was firm. This was an ash that was light gray in color. The burn rate and burn temperature were both ideal. 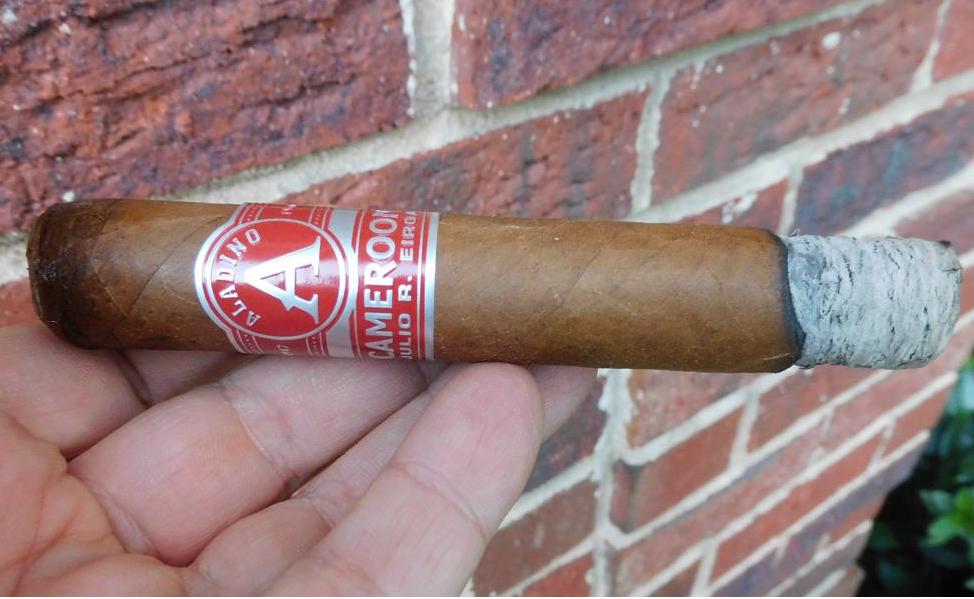 Burn of the Aladino Cameroon Robusto

The draw of the Aladino Cameroon Robusto performed excellently as well. There was a touch of resistance that I have a preference for. This made for an ideal draw while keeping to low maintenance to derive flavor from.

In terms of strength and body of the Aladino Cameroon Toro, this was a medium strength, medium to full-bodied smoke. For the most part, there was not much change in the intensity level of either attribute. When looking at strength versus body, the body maintained an edge throughout the smoking experience.

This is a cigar I could recommend to any cigar enthusiast at any time the day. As for myself, this is a cigar I would easily smoke again, and it is one I wouldn’t hesitate to make a box purchase of.