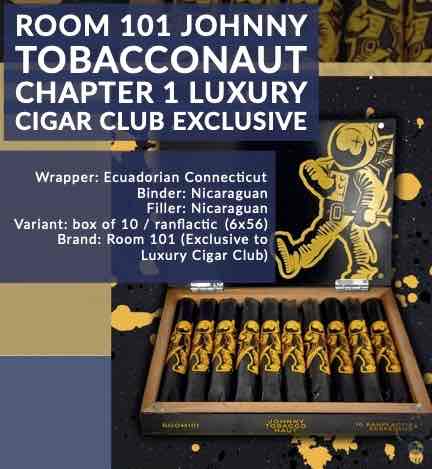 Room101 Cigars’ Johnny Tobacconaut, a line introduced while the brand was working with Davidoff CIgars, is making a comeback. The brand is an exclusive to Luxury Cigar Club, which also distributes to partner retail shops. It will feature a new blend and size.

The updated Room101 Johnny Tobacconaut, being dubbed “Chapter 1” consists of an Ecuadorian Connecticut wrapper over Nicaraguan binder and filler. It is being offered in a 6 x 56 figurado known as Ranflactic. While the Ranflactic was a vitola name with the original line, the refreshed Johnny Tobacconaut Chapter 1 will be longer and thicker.

Room101 Johnny Tobacconaut was introduced just prior to the 2015 Trade Show. When Room101 ended its distribution and production partnership with Davidoff, the line when on hiatus.