Epilogue – (Tales from the IPCPR Part 21) 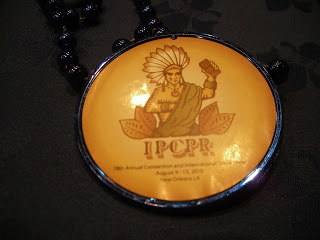 The following is the final installment of the “Tales from the IPCPR” series on Cigar Coop.   The opinions expressed here are of Cigar Coop and Cigar Coop alone.

Sure IPCPR was a learning experience and it was a blast, but it still was a convention and trade show.   From coming out of this, I took several themes home and I thought I would share them here.  So without further adieu, here are the five major themes I took home from New Orleans 2010.

1.The Value Priced Cigars:  Most of the manufacturers were definitely honing in on the magic price point of $5.00-$7.00 SRP on cigars.   In a lot of ways, I think of this as the “Casa Magna Revolution”.  What the folks at Quesada did with Casa Magna – putting a high quality stick out at a great price point seemed to catch on with many of the manufacturers for 2010.  Just ask folks such as: Gurkha (Viper, Ninja),  Torano (Master, Brigade, Single Region), CAO (La Traviata Maduro), Oliveros (Swag), Perdomo (Nick’s Stick), My Father (Jaime Garcia), Altadis (A.Turrent Triple Play)   There were others, but these are a few of the major standout sticks that came out.  All great sticks and all very affordable.

2.The Focus on the Retailer:  The manufacturers are being very sensitive to the battle the retailers are facing over the internet, so many of the new sticks (examples Oliveros, Torano come to mind) are now being offered exclusively.   This is great news for the retailers who want to keep the foot traffic in the store – and have those cigars flying off the shelf.

3. The Cigar Bloggers:  There was a lot of controversy on whether the Cigar Bloggers belong at IPCPR or not.  Working for a retailer, I recognize that this is a trade show.   Manufacturers are looking to write orders and generate sales.   There is no question that should be the #1 emphasis.  However, the Cigar Blogger community offers a great opportunity for free publicity for many of these new sticks.  What better way to promote a stick than through a cigar blog.   In the long run, wouldn’t that be a great avenue to generate additional interest and sales for the sticks being promoted.?  Now for bloggers who are “just taking the sticks and running” – and not promoting sticks or making recommendations in a consultative role back to the retailers, shame on you.

4.Tobacco Legislation:  This was definitely a focal point at IPCPR.  CRA held a meeting and there were discussions at the kickoff breakfast.   This was something on everyone’s mind, yet somehow I just don’t feel enough was done here.   We all know fighting tobacco legislation is vital to the survival of this industry -and the CRA is a great starting point, but it takes everyone.   To be honest, I expected more retailers and manufacturers to be much more fired up throughout the entire show as opposed to just showing up for a couple of meetings.  I do believe everyone wants to battle the Pleasure Police, yet the mobilization efforts seemed a little too quiet for me.  In fairness, I hate to be critical here without a solution that comes to mind – right now I just don’t have a magic answer to what needed to be done.  Perhaps an organized rally…..

5.Still not One Community:  This one is tied somewhat to my fourth point.   In the Cigar Chick’s recap of IPCPR, she discussed “One of the common topics this year was how we are one community- a family, and at the end of the day competition is not the focus….”.   In my opinion, there is still a lot of work that needs to be done here – especially if we are going to battle the Pleasure Police (thus the tie to the fourth point).   The simple case on why I disagree is this.   When Coca Cola sells soda to a big supermarket, does the supermarket prevent the smaller delis and drugstores from being able to sell that same soda?  The answer is no.  Now apply that point to the cigar business and you will understand why this business is still not one community.   Let the law of supply and demand balance things out and free market economics dictate.

Thank you for following this journey……hope to do this again in 2011….