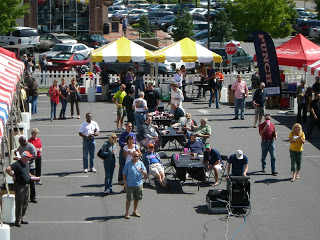 The first annual Lite Up Charlotte was held on Saturday, October, 2nd at Ballantyne Village right next to the primary sponsor, Outland Cigars.  This was a benefit to the Bloom Project.   Something special was truly launched on this day.  Not only does Charlotte now its own true CIGAR FESTIVAL, but the cause was made worthwhile.  Five orphan placements were inquired for on this day – a truly great launch for the event.   For the 150 to 175 attendees who strolled a the festival on a beautiful Fall day in the Queen City, nobody was disappointed!

There were a list of vendors that easily be a part of the Who’s Who of the Cigar World.   This included:

And they were providing great sticks!  Here is a sample of what most people walked away with!

Every attendee got a free humidor to put their sticks in! 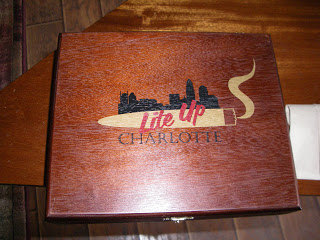 Special guests included Rafael Nodal of Oliveros and Abraham Flores of Pinar Del Rio Cigars.   One of the coolest things though was to see all of the Cigar Manufacturers talking to each other throughout the event!

Yes Outland Cigars has developed something special.  The great news is they are planning it again in 2011.  Save the date – October 1, 2011.   The countdown begins!