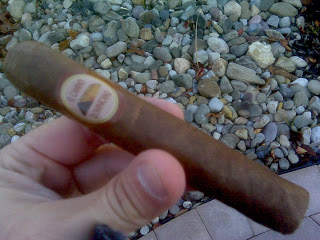 For the past two years,  the emergence of the “value” premium cigar has resulted in a lot of companies jumping on the bandwagon.  I define these as high quality premium sticks in the $5.00-$7.00 range.   Sticks such as Gurkha, Torano, Oliveros, Perdomo, and CAO have all capitalized on this bandwagon and have had both commercial success and critical acclaim in doing so.  Still many cigars have sought to provide further value – by introducing cigars below the $5.00 price point per stick.   To keep costs down, these cigars are packaged in sealed “bundles” as opposed to cedar boxes.   These low-priced cigars that are packaged like this are what I call “bundle” cigars.   One such cigar I was intrigued to try was Manuel Quesada’s El Camino Dominicano.  Now I’m a Manuel Quesada fan – as well as a fan of his sticks.   Therefore I was very excited to try his bundle stick – the El Camino Dominicano.   Unfortunately, this stick just doesn’t hit the mark.

Initially looking at the composition of the stick had me excited – especially the use of the Indonesian wrapper.  The other interesting fact is that the binder and filler incorporated tobaccos from the trifecta of cigar tobacco countries – Nicaragua, Honduras, and the Dominican Republic:

The stick is available in four sizes:

For this review, I selected the Robusto size.   I put a straight cut into this stick, toasted the foot and began to enjoy this cigar.   At first I got a nice cedar-like sweetness from this stick.   The sweet flavors were never very pronounced.    It didn’t take long before a tart-like flavor tone would soon emerge and take over.  I didn’t find the tart flavors to be very pleasant.  As the stick burned, the stick would get more bitter.  Unfortunately the initial sweetness never returned.

The burn and draw were very good on this stick.  Considering at times I had some issues with Quesada sticks burning well, I was pleasantly surprised by this.  The finish to the stick was firm and cool – and I was able to get a nub on it.

Overall, I did find this stick to be both mild in terms of strength and body – despite the fact that some folks had both of these categories in the mild to medium range.   However, the poor taste of this cigar was just too much to overcome.   I have to recommend you pass on this stick.