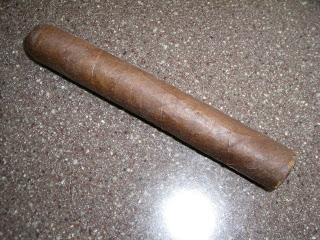 The second review for 2010 is the cigar that I ranked the #2 Cigar of the Year in my Top 30, the Tatuaje Gran Cojonu 2009.  This might be one of the most impressive big ring gauge cigars I ever had.

The Tatuaje Gran Cojonu 2009 was a late release in 2009.  It came out late enough where I could not properly sample it to give it justice for the 2009 list, so I opted to give this cigar a deferral into 2010.   The impressive thing about this cigar is the size.  This is a monster 6.5 x 60 cigar.  I’m a huge fan of 60 ring gauge cigars, so this was something that caught my attention.   There isn’t a band on this cigar, but it doesn’t need it – the size and beauty of the  Nicaraguan Corojo 99 wrapper of this cigar and its covered foot give this cigar a unique identity.

This cigar is part of the Cojonu series that has been introduced every three years by Pete Johnson of Tatuaje (there have been 2003, 2006, and 2009 versions)   Production is done under the watchful eye of the master of the Nicaraguan tobacco – Don Pepin Garcia.

There is only a single vitola available in this cigar – the monster 6.5 x 60.

The initial flavor notes I got from this cigar are a combination of oak and mild pepper.  About a minute later, I felt a pepper blast in the tradition of a Pepin cigar.  This pepper is a combination of black and cayenne pepper.   The pepper blast will subside somewhat (but not disappear) when you reach the 1/3 point of the cigar.   It is around the 1/3 point where I begin to get a notes of leather (now I’m good at identifying leather notes).  The leather notes are combined with the initial oak notes and the subsided pepper flavors.   As the cigar approaches the mid-way point, a bittersweet chocolate taste will emerge.  The pepper notes also somewhat morph into cedar spices.   These were the flavors I found in this cigar as I took it to the finish.

Each time I have this cigar, I’m amazed at the draw and the burn for such a big cigar.  I can have this cigar outside with a breeze in the air.  Normally this will cause a lot of cigars to tunnel – especially those that are large 60 ring gauge sticks.   With this stick, even with a breeze – no tunneling whatsoever.

This is a cigar that was worthy of being considered for Cigar of the Year.   The cigar enthusiast who gravitates to the 60 ring gauge sticks will love this cigar – and someone who wants to try the big ring gauge will also be very happy with this stick.