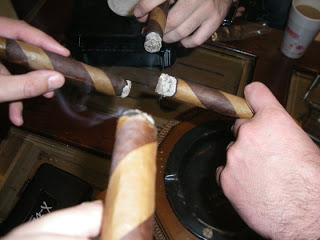 I wanted to think of something special to put up for Post #200 on Cigar Coop.   My inspiration for this came from Post #199 – when I discussed how cigar enthusiasts have to deal with substandard conditions on where they can enjoy a cigar.

In that post, there was some deliberate wording when I was referencing cigarette users and cigar users.  For cigarette users, I said the word “cigarette smokers”.   As for cigar users, I went out of my way to say the word “cigar enthusiast”.   Some may scoff or mock such wording, but when it comes to the consumption of cigarettes and cigars, they only thing they have in common is literally that each word contains the letters “c-i-g-a-r”.

With cigarette consumption, it really is all about smoking – thus I use the term cigarette smokers.   The primary activity involved with having a cigarette is lighting it up and smoking it.  Cigarette smokers will often have to “rush outside” to grab a “quick smoke” or to satisfy a “nicotine fit”.     They often gravitate to the same brand of cigarettes.   Occasionally this may be a social activity, but I would say that is more of an exception than a regular occurrence.

With cigar consumption, smoking is an activity – and an important one.  However, it really is only one component of the full cigar experience.   It goes back to the Cigar Coop motto, The Smoke, the Craft, and the People – thus comprising what a cigar enthusiast is all about.    Cigar enthusiasts don’t rush out for a smoke – sometimes they might get anxious, but usually the enthusiast wants to savor the moment to enjoy a cigar.  They often will mix up what cigars they smoke – usually not smoking two sticks in a row.  In fact, some daily cigar enthusiasts won’t smoke the same stick over a week’s period of time.   Much like wine tasting, cigar enthusiasts are often very interested in the flavors and complexity produced by the cigar.

Many cigar enthusiasts do have an interest in the blend of the tobacco, the origins of the tobacco, the shape, the growing and production aspects of the cigar – thus “the Craft”.   Finally, cigar enthusiasts often love to have a cigar in the fellowship of other people.  They enjoy not the just interactions with each other, but the interactions with the retailer, and the manufacturer – thus “the People”.

Net-net – its not Cigar Smoker, its Cigar Enthusiast.