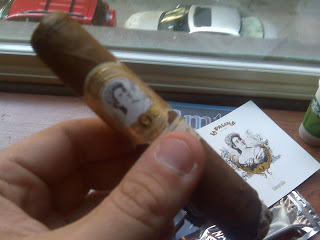 Last year, there was no question that one of the revelations in terms of a new cigar line that was launched was Bill Paley’s La Palina line.  These cigars might cost a little more, but they consistently deliver in flavor and quality.   Last year, I focused around the Family Series and rated two cigars in this line in my Top 10 Cigars for 2010.   The other cigar in the line is the 1896.   I’ve had a backlog of reviews, but after sampling another one of these today, I felt it was time to provide an assessment around the 1896.  This cigar holds true to the great cigar experience that has been provided by the La Palina brand.

First a little background on La Palina.  La Palina was founded by Bill Paley. Bill’s grandfather Samuel Paley owned a cigar store in Chicago where he made the La Palina Cigar.    Bill’s father, William S Paley worked for Samuel and was involved in radio marketing.  Working along side his father, William managed to sponsor a show called the “La Palina Hour” and was a true pioneer in the concept of sponsorship.   William eventually went on to purchase radio stations which would be the formation of Columbia Broadcasting System – aka CBS.  Meanwhile Sam retired and thus retired the La Palina Cigar line. Several years ago, William’s son Bill was soon intrigued with bringing back a piece of family history and began a journey that would ultimately lead to the restoration of the La Palina Cigars.    Bill has teamed up with the folks at Greycliff Cigars to produce this stick in the Bahamas.   You can read more details of the story on the web-site in detail.

I recently heard Bill Paley on Cigar Dave talk about his line of cigars. He emphasized a point that he prefers a cigar that delivers in flavor as opposed to strength – and it is a point that I subscribe to. With his Family Series, this is definitely the case   The La Palina Alison is a medium strength, medium body smoke while the La Palina Babe actually is more mild to medium in strength.   The interesting thing about the 1896 is I believe this cigar caters to someone who loves a full strength, full bodied smoke – yet Paley remains true to his mantra not producing an overpowering cigar but one that is rich in flavor.

The 1896 takes its name from the year that Samuel Paley founded the original La Palina brand. Without further adieu, let’s look at the 1896 in more detail:

The 1896 is intended to be a limited production cigar.  The national origins of the tobaccos match up with the Ligero cigars in the Family Series, yet have different tobaccos.

For this cigar experience, I opted to place a straight cut into the cap of my 1896.   The pre-light draw was very interesting.  It was a mix of mild pepper notes and tea.   It was then on to light the foot and enjoy this cigar

On the initial draws, I was treated to notes of tea with a backdrop of pepper spice and cherry sweetness.  The tea notes are going to be the ones that are pretty consistent from start to finish with this smoke.  Now I admit, I more of a fan of coffee than tea – and the same applies to the flavors I get from cigars.  Despite that, I liked the way the tea notes were delivered with this cigar.   The tea notes reminded me somewhat of the trademark tea flavors I get from several Illusione cigars.   Each time after smoking the 1896, I think this would be a good cigar to give to an Illusione junkie – even though the 1896 is not a Nicaraguan puro.

As for the spice, it is a nice cross of pepper and cedar spice.   The spice definitely picks up in intensity in the second half of this smoke.   It then kicks down when it reaches the last third and I actually picked up some mild chocolate notes toward the end.

The nub on this cigar was cool, but soft.   The flavors were still present at the end, although there were a couple of harsher notes I picked up.

La Palina Cigars are pretty consistent when it comes to burn and draw.   The burn on this cigar is excellent and really didn’t require any major touch-ups.  I did find the draw on the 1896 to be a little loose.   It reminded me a bit of how the Avo LE10 draws.   If you smoke this too fast, it will have an effect on the burn rate and temperature.   My advice here is the same as the Avo LE10 – smoke it slow and savor this great smoke.

As I mentioned earlier on, this is probably going to offer up the most of the current La Palina line in terms of strength and body.   I would definitely rate the 1896 a medium in strength, but when comparing it to the La Palina Alison and Pasha (the ligero Family series vitolas), I still think it has more pop in this category.  I also think this cigar offers quite a bit in body – and its just enough to qualify it for the medium to full category in this area.

La Palina does it again – producing another winner.   Now I will admit, the flavor profile of the Family Series was more in line with my pallet, but this was still a good cigar.  This is a cigar I would reach for again.  The La Palina sticks are going to cost more than many cigars on the market, but you cannot put a price on quality.   You are looking at about $20.00 (give or take a few bucks) for any stick in the line.   For a novice smoker who wants a quality cigar, I’d still steer them to the Family Series, but I can see this cigar appealing to the more seasoned cigar enthusiast.

Disclaimer:  The cigar experience described in this assessment was purchased at Iwan Ries in Chicago, Illinois,