April 22, 2011 William Cooper Reviews, Uncategorized No Comments My Father, Nice to Have, Review 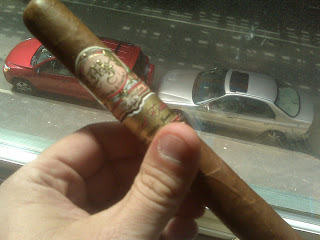 I managed to be in Chicago at the right time where Iwan Ries just put out their shipment to the general public.  I purchased two of them and the good news is the Pepin marks of quality are still there.

There were two distinguishing factors around the Limited Edition 2010: 1) There have only been 24000 sticks made, each put in an individual coffin box.   The coffin boxes are packaged into full boxes of 12, so there are only 2000 boxes made;  2) Each of the sticks were rolled personally by Don Pepin Garcia and his son Jaime – so there is true Garcia family pride in each Limited Edition 2010.

For the 2011 cigar, Don Pepin and Jaime did not individually roll these cigars.  This cigar is being marketed as “Jaime Garcia Master Blender”.  There is no loss in the Garcia family pride here as this is a well made cigar. They are not packaged in coffin boxes, but still being sold in boxes of 12.  I also believe that the production has been upped to 5000 boxes – so there are 60000 cigars available.

Externally looking at this 2011 Limited Edition blend, the profile is similar, but the tobaccos are different:

The 2011 Limited edition blend also incorporates Pelo de’Oro tobacco.  This too is similar to what was done in the 2010 Limited Edition.

For my Limited Edition 2011, I opted for a straight cut.  The pre-light draw for this cigar was a nice combination of butter and black pepper.  Definitely one of the better (and to some extent bolder) dry draws on a cigar I have had.  It was then on to lighting this cigar and seeing what the Limited Edition 2011 would offer.

It just isn’t a My Father or Don Pepin cigar without the signature pepper blast to start the cigar.  The Limited Edition 2011 is true to this start.   The pepper blast diminishes and starts to balance with notes of coffee, butter, and cream.  At this point, there was a touch of sweetness that I put in the caramel/butterscotch arena.

About 5 percent into the cigar, wood notes began to surface and balance very nicely with the coffee, butter, cream, caramel sweetness, and the pepper.   Around 10 percent, the wood notes morphed into tea notes.  The tea notes are not as pronounced as I have seen with Illusione or the La Palina 1896, but they are present.  It blended nicely with the caramel, pepper, butter, and cream notes.

It is around the midway point when the spice kicked it up a notch.  I got much more spice here than I got when the Limited Edition 2010.   The spice seemed to be a good cross between pepper and cedar spice.  The caramel sweetness and tea notes are still very much present.

The finish to the cigar was firm and cool.  I got a little harshness on the nub, but this was a 90+ minute smoke each time I had it.

For both strength and body, the Limited Edition 2011 falls right into the Medium to Full category.   I thought this had a little more of a nicotine kick than the 2010.   The depth of the flavor notes was pronounced, although I would still hesitate to put it as a solid “full bodied smoke”.

There is no question the My Father Cigar line is something special.  The Limited Edition 2011 will definitely appeal to core fans of this line and of Pepin.  The price point is around $20.00 SRP, so this will not be an inexpensive cigar.  I expect that this cigar will still be in my 2011 Cigar of the Year countdown – as well as many other folks’ lists.   I enjoyed this one better than the Limited Edition 2010, but in general My Father cigars do not fall into the top of my flavor profile.  Serious cigar enthusiasts (and Pepin enthusiasts) will appreciate what this cigar brings to the table – and I’d advise checking it out.

Disclaimer:  The cigars for this experience described in this assessment were purchased at Iwan Ries in Chicago, Illinois.