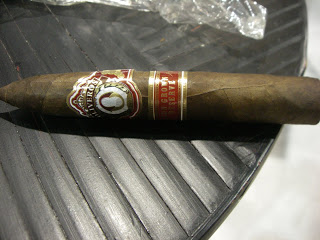 2011 has been a very exciting year for Oliveros Cigars.   The IPCPR featured a release of limited run cigar added to the Swag brand called the Limitado 99 and the launch of another new brand called Aging Room Cigars.  With the excitement to the other brands, one cigar that I overlooked was an a cigar put under the Oliveros name – the Oliveros Sun Grown Reserve.   Recently, I previewed this cigar, but did not sample this cigar until the 2011 IPCPR.  After I sampled this cigar, this proved to be one of the revelations of the 2011 IPCPR trade show.

Oliveros has made some changes this year.   The Sun Grown Reserve has been released under the Oliveros brand and utilizes the new company logo.  This release like the Aging Room Reserve line represents a return to traditional packaging – balancing the contemporary packaging from Oliveros’ Swag line very nicely.  On the Oliveros web-site, the slogan is listed “A new vision – powered by our traditions”.  I think this is exactly the way Oliveros is approaching their 2011 marketing.

How well does the Sun Grown Reserve fit into this vision?  Why was it such a revelation at IPCPR?  Let’s take a closer look:

Another thing I like is how Oliveros has balanced the tobacco profiles with their new releases.  With the Aging Room Cigars M356, the focus was on a Dominican blend.  With the Sun Grown Reserve, the focus is on a Nicaraguan puro.

For this cigar experience, I sampled the Belicoso vitola.   With this shape cigar, I always default to a straight cut – which is what I did for this cigar.  The pre-light draw was very pleasing – it provided some nice notes of coffee.  It was at this point I was very excited to fire up this cigar and see what it brings to the table.

The Oliveros Sun Grown Reserve was a true classic smoke when it comes to flavor.   The initial draws of the cigar continued the coffee flavors that started on the pre-light draw.   It did not take long before some spice notes emerged.  The spice was subtle and seemed to be more of a classic cedar spice.

Shortly into the first third of the cigar, some caramel-like sweet notes emerged.  These sweet notes complemented the coffee and spice perfectly.   A lot of times you can get a wide variety of flavors on a cigar, but when the flavors mesh perfectly – that is the ultimate test.   This is what the Sun Grown Reserve brought to the table – and it passes with flying colors.

The spice definitely picked up on the second half of the smoke.  The Sun Grown Reserve definitely had some nice spice on the finish.   The nub was simply outstanding – firm and cool and not a bit of harshness to it.

Many times, a sample from IPCPR (which this cigar was) can often have problems in this area because of storage and transport issues.   This was not the case with the Oliveros Sun Grown.  This cigar had a flawless razor-sharp burn that required one to two touch-ups maximum.   The burn rate and temperature were perfect as well.   The draw was outstanding as well – a real joy to smoke this cigar.

When a cigar has a good balance of strength and body, I often will highlight it was a “textbook case” for a cigar experience.  This is exactly what the Oliveros Sun Grown brings to the table.  From a nicotine strength point of view, I assess the Sun Grown Reserve as a “medium”.   The flavors have some nice depth and easily fall right into the “medium to full” category.

With the Swag Limitado 99 and Aging Room Cigars M356, the Sun Grown Reserve completes a trifecta for three solid cigars for 2011.  This cigar lives very much up to the cigar “A new vision powered by our traditions”.

In my opinion, the Sun Grown Reserve was a highlight of the 2011 IPCPR and as more retailers and media sample this cigar, I’m confident they will see a lot of the great things this cigar brings to the table.  The Sun Grown Reserve will easily appeal to both experienced and novice enthusiasts. This would easily be a cigar I would buy a box of and would recommend this to others.

Source: This sample was received at the 2011 IPCPR Trade Show.  The sample was initiated by Oliveros Cigars in order to provide feedback.   I am appreciative for the sample, but in no way does this influence this review.

Note: All samples received from the 2011 IPCPR Trade Show will be included in my “2011 IPCPR Series”