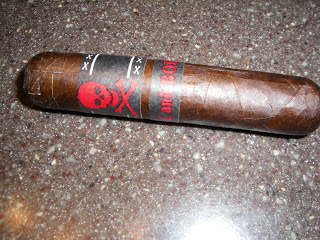 Over all of the micro-batch releases from Viaje, probably the most sought after has been Viaje Skull and Bones’ series.  The initial release of the Skull and Bones Viaje Daisy Cutter set off a frenzy for cigar enthusiasts seeking to add this cigar to their collection.   While the Viaje Oro Reserva VOR #5, got a lot of attention from Cigar Aficionado after being named the #2 Cigar for 2011 – make no “bones” about it, the buzz among cigar enthusiasts from Viaje has been the Skull and Bones.  Following the initial release of the Daisy Cutter, there have been three follow-up release cycles.  For the most part, a common theme has been that the second and third release cycles did not meet satisfaction level of the first release cycle.   We now enter the fourth release cycle and Viaje has released two vitolas for this cycle – the Little Boy and Fat Man.   The assessment will review the shortter and thinner  robusto – the Viaje Skull and Bones Little Boy.   In my opinion, this cigar proves to capture a lot of the magic that the Daisy Cutter became so famous for.

This will be an extremely limited release.  I don’t have the specifics on the number of boxes that Viaje has released, but I think its safe to assume that the Viaje authorized retailers may have one to two boxes maximum of this cigar.

Let’s break down the Viaje Skull and Bones Little Boy and Fat Man and see what it brings to the table.

In general, the folks at Viaje keep the blend close to the vest.  Being that the Little Boy (and Fat Man) is from the fourth release cycle, we know this uses the newer blend.   I do not have the specifics on what that change is in the new blend.   Here are the details of what I do know of the blend:

Here is a summary of the four release cycles.   With the exception of the MOAB, the Skull and Bones series has for the most been a series of short robustos.

With the fourth release cycle, the cigars featured a cap on both ends of the cigar.

The initial draws of the Skull and Bones Little Boy continued the notes of leather and chocolate I got from the pre-light draw.  These notes were complemented by secondary notes of pepper.  Around the five percent point of the cigar experience, the chocolate notes morphed into more of a classic espresso note.

The flavor profile holds through the first third of the Skull and Bones Little Boy.  As the second third begins, the pepper notes began to increase in intensity.   The pepper meshed very well with the espresso and leather and did not becoming overwhelming during this part of the cigar experience.   The pepper finally breaks through in the final third and becomes the dominant flavor note.  The cigar finishes as a real pepper bomb.  While it was very spicy at the finish, the cigar was not harsh.  The nub was soft and cool – simply the way a cigar should close a cigar experience.

One complaint I’ve had with Viaje is that I often find their cigars are shipped to the retailers they are often a little green.  With Viaje I’ve seen this reflected in the ash (often more black) and the flavor profile.  The burn has often be jagged when the Viajes are green. For my sample of the Skull and Bones Little Boy, I have had it for a little over a month, and this cigar seemed perfectly aged.  There were absolutely no burn issues as it burned very sharp at a cool temperature.  The burn rate was slow – which I liked for a short cigar.  I had a little more resistance on the draw than I would like, but it still wasn’t a bad draw.

The Skull and Bones Little Boy is not the most complex cigar, but it did provide some very good flavors.  If you like espresso and pepper flavors, this might be a cigar for you.  The fnish to this cigar may prove to be a little overwhelming to some – especially novice enthusiasts.  This was a cigar I did enjoy.  I’m not sure I would go through hoops to get this cigar, but if it were on a retailer’s shelves, I certainly would purchase it.

Source: This sample was from Viaje Cigars via the 2011 IPCPR trade show..  These sample was initiated by Viaje Cigars in order to provide feedback.   I am appreciative for the sample, but in no way does this influence this review.

Note: All samples received from the 2011 IPCPR Trade Show will be included in my “2011 IPCPR Series”