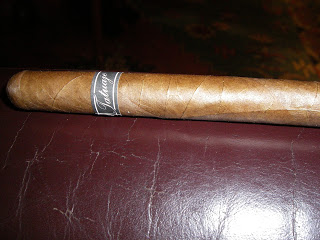 There is no doubt when there is a strong association with Tatuaje and “Limited Release” cigars.   While Tatuaje has built a strong core portfolio, it has been the limited release cigars that have been a major factor in the brand’s success.   One series that has been sought after by Tatuaje enthusiasts has been the Tatuaje Private Reserve series – better known as the Tatuaje Black Label.   The Black Label series has been primarily a cigar that has been used for special events, special promotions (aka the Cigar Rights of America sampler pack), or just limited sales releases.  In 2011, a new vitola was rolled out under this umbrella.   This one is a petit lancero.  I recently have had a chance to sample some of them.   My overall assessment is that this is a very good cigar and one that goes back to the simplicity of what cigars are all about.

The background to the story of the Tatuaje Black Label goes back to where Tatuaje founder Pete Johnson visited an “island famous for its cigar making”.  Apparently Johnson had been given a cigar made by one of the locals and would smoke it each morning.   He felt that this was one of the best cigars he ever smoked.  After returning home, Johnson set out to recreate this cigar with his blending partners, the Garcia family, but using Nicaraguan tobaccos.  The end result was the Tatuaje Black Label was born.  It originally became Johnson’s private blend before eventually being released on a limited basis (more on a vitola by vitola basis).

The end result is always – “how well does this smoke”?   Let’s take a closer look at the Tatuaje Black Label.

The Tatuaje Black Label is an all-Nicaraguan puro.  The Sun-Grown Criollo wrapper has a toothy appearance much like cigars from the “island” famous for making cigars.

This assessment will focus on the Petit Lancero vitola.  There have been other vitolas that have been released over time and they have been included here for completeness.

* In the case of the Tubo, I’ve been told there is a variation in the blend.  In all cases, I have definitely found nuances and differences in the flavor profiles of the vitolas of the Tatuaje Black Label series.

I started with a straight cut into the cap of the Tatuaje Black Label Petite Lancero.  The pre-light draw was very classic – a combination of cedar with a hint of caramel.   I found the dry notes not to be overly robust, but at the same time the overall pre-light experience was satisfactory.   I was now anxious to fire up the Tatuaje Black Label Petit Lancero and see where the road would take me.

Upon the initial draws of the Black Label Petit Lancero, I noticed the body of the cigar immediately increased from the pre-light draw in terms of the depth of the flavors produced.  I detected notes of wood and pepper to start.  To some extent, this seemed like a classic “Garcia family” pepper blast.   The pepper quickly moved into the background, and took on some cedar spice qualities to it.   Early on, the flavors were complemented from some very nice notes of nut.

Around the ten percent mark, I noticed some unsweetened caramel join the fray of flavors already existing.  Slowly as the cigar moves into the middle part of the smoke, I noticed an increase in the sweetness of the caramel.  At times, I also detected some butterscotch notes.   The Tatuaje Petit Lancero does not get overly sweet – which is a testament to the cigar.

The flavor notes all mentioned above are present in the second half.  The main flavor is a nice fusion between the cedar spice and caramel/butterscotch sweetness.  This is the way the Tatuaje Black Label Petit Lanceo comes in for a close.  The finish was not harsh at all.   The end nub was cool, but it was a bit soft.

The construction attributes of burn and draw get some nice marks on the Tatuaje Black Label Petit Lancero. Given that this was considered Johnson’s personal blend, I would not expect anything less than excellent for burn and draw – and that’s exactly what we get here.  I found the burn of the Tatuaje Black Label Petit Lancero to burn sharp – requiring few touch-ups.   It also burned at an ideal rate and an ideal temperature.  The Petit Lancero also had an outstanding draw – making it a pleasure to smoke.

The more I explore the Tatuaje brand, the more I realize that when Johnson sets out to create a cigar, he doesn’t like the strength to overpower the flavor.  This is a great best practice in cigar making – and this is exactly what the Tatuaje Black Label implements.   From a nicotine profile, this cigar is going to provide what I would term “just enough strength” and I would assess this as a solid medium in this category.   As for the body, I would have liked to have seen a little more depth to the flavors – as the flavors were good.  I assessed the Tatuaje Black Label as a medium in terms of body.   This is the one shortcoming I had with the cigar because if the body had moved into the medium to full range, this cigar would have been even better.

When I look back to what Pete Johnson looked to accomplish by re-creating this brand, I believe he was not looking to over-engineer the blend.  In fact, I would say simplicity is a key word in terms of this blend.  Johnson mentioned when he was given that original cigar made by an “island” local,  he would smoke it in the morning.   If it’s simplicity, the Tatuaje Black Label succeeds in doing this – and there is nothing wrong with this.   The Tatuaje Black Label is the kind of cigar that either a novice or experienced enthusiast can enjoy.   I’ll admit, the Petit Lancero is not my first choice for a vitola, but in the end I thought the size/shape worked.   I would definitely smoke this again.