The first thing I found interesting was the banding of this cigar.  The cigar features two bands. The band features a covering from the foot going about halfway up the cigar with another band in the center.   For my sample above, I gave away the covering to the person who gifted me the cigar.  Here is a sample of the cover on the robusto. 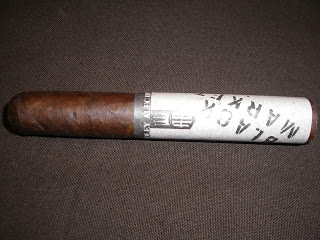 Let’s take a closer look at what makes up the Alec Bradley Black Market.  As you can see, I’ve opted to hold off on a final assessment rating and go with a Pre-Review.  The details of the cigar experience below will explain why.

At the time of this writing, there are five vitolas available:

Since I was gifted the Alec Bradley Black Market Toro, this was the vitola I went with for my cigar experience.  I placed a straight cut into the cap and commenced the pre-light draw.  The pre-light draw notes were amazing – packed with roasted coffee, deep chocolate notes, and a hint of cedar.   The flavors were very robust for a dry draw.  Based on this, I was very excited to fire up the Alec Bradley Black Market and see what it would bring to the table.

The initial flavors of the Alec Bradley Black Market are a combination of the rich,deep chocolate notes and some cedar spice.   There also are some hints of chicory in the background.   At this point, like the pre-light draw there has been some great flavors – so far, so good.

The part of the smoke that disappointed me was that those rich chocolate notes did not remain in the forefront for very long. The cedar spice and chicory picked up as the smoke progressed.  These eventually became the dominant flavor notes.   The chocolate lost its sweetness and became more of a bittersweet chocolate.  I also picked up notes of roasted coffee as the smoke progressed into the middle part. The flavors delivered were incredibly robust, but I just wasn’t into the bittersweet chocolate/spice/chicory combination.   In general, this did not provide my first choice of a flavor profile for a cigar.

On the last third of the cigar, the cedar spices moved to the forefront and became the dominant flavor note.  The cigar didn’t finish rough, but it did have a spicy finish.   The nub on my Alec Bradley Black Market was soft and slightly warm.

For the most part, the Alec Bradley Black Market had a pretty sharp-burn that required few touch-ups.  I did notice the burn rate was a little faster than I normally prefer for a Toro.  The burn temperature was also a little warmer than I normally prefer.   From a draw standpoint, the draw seemed a little loose – and this could explain why it burned faster and hotter than normal.  I did wonder is whether the warmer burn/loose draw could have contributed to the flavor profile.  My gut tells me that this is not the case.

One thing I did discover was that the Alec Bradley Black Market does not overpower you in terms of nicotine.   I found this to be just a tad under “medium to full” in terms of strength.   However from a depth of flavor standpoint offers quite a bit – making it a full-bodied smoke.  I’ll emphasize again, while the flavors did not agree with me, this cigar did not suffer from a lack of flavor.

I’ve opted to hold off on a final assessment rating for now.  Since I’m still wondering whether or not the warmer burn./loose draw influenced the flavor profile, I don’t want to hold it against the cigar – especially if this was an isolated incident.  Even if the flavors did not agree with me, I still think the cigar as is can appeal to some people – so it might be worth checking out.  Stay tuned for an assessment update in the future.

Source: This cigar was gifted to me by a friend.