So I am doing a little bit of a flip-flop with this assessment.  A couple of days ago, I assessed the Viaje C-4.  One thing I had mentioned what I did was that I sat on my Viaje C-4 for about four months.  Overall, that aging process did the trick as the initial reviews I had seen had the C-4 being “green”.  With many Viaje cigars, I have found that they require 8 to 12 weeks of aging once they arrive in a retailer’s humidor.   Is this the case with every Viaje?  No, but it has been with several of them.   This brings us to Viaje’s latest release – the White Label Project Stuffed Turkey.   The Stuffed Turkey just started arriving on shelves for Thanksgiving.  Since we are getting close to the end of the cigar year, I have opted to assess this cigar.  Overall, I found the experience with the Stuffed Turkey to be disappointing – and most likely I made the wrong call in not aging this particular cigar.

The White Label Project (WLP) is a line that has been released by Viaje this year.  The cigars in this line are considered somewhat experimental to varying degrees.  Such blends have included the Viaje WLP Candela and the WLP 50/50 Red.  For the Viaje Stuffed Turkey, this marks Viaje’s first venture into the world of 60 ring gauge cigars.   The name Stuffed Turkey was inspired by a conversation Andre Farkas had with the online cigar revie website – the Stogie Review.

As with most Viaje releases, they are produced in microbatches.  Authorized Viaje retailers most likely will receive 1 to 2 bundles of 25 cigars.   Here is the packaging of the cigar: 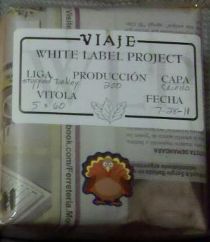 The Stuffed Turkey features a very oily Nicaraguan Criollo wrapper.  I’ve asterisked (*) the binder and filler as I still am trying to finalize that they are indeed Nicaraguan in origin.

The Viaje White Label Project Stuffed Turkey is currently only available in a 5 x 60 vitola.  It is shipped in bundles of 25.

As with any big ring gauge cigar, I went and placed a straight cut into the cap.   I commenced the pre-light draw on the Stuffed Turkey.   The dry draw notes I was treated to was a combination of wood, black pepper, and a little raw caramel.  Overall, I though the flavors I got from the pre-light draw were satisfactory, so I was excited to fire up the Stuffed Turkey and see what was in-store.

The initial flavors of the Stuffed Turkey continued the flavor profile of the pre-light draw of wood and pepper.  Early on, I started to get some sweet notes, but it was very difficult to pinpoint exactly what the sweet notes were.   I also saw the emergence of some chicory notes.  In general, chicory provides a natural bitterness.   At this point of the cigar, it was not overly bitter – and actually provided some good flavor balance to the other flavors I was detecting.

Toward the end of the first third, I detected some floral notes – they were a little similar to what was in the Viaje C-4.   By the midway point of the cigar, these notes dissipated.   I also noticed the pepper spice had subsided a bit, and there was the emergence of some bittersweet cocoa notes.

So far, the flavors were decent from the White Label Project Stuffed Turkey.  It was in the last third of the cigar where things went downhill.   The bitter notes that were present throughout the whole smoke increased.   It made for a very harsh finish with the Stuffed Turkey.   I’m thinking the burning a young cigar with a big ring gauge led to this bitterness.   While the finish was harsh, I still managed to get a nice nub – firm and cool on the finish.

Some of the lack of aging was very evident on the burn.   The burn required many touch-ups with my lighter to keep it straight.   The ash from my Viaje White Label Project Stuffed Turkey was more blackish.   This was another sign that the cigar was young.    The burn rate and burn temperature were not a problem – and I don’t think this had any impact on the poor finish I had on this cigar.   The draw was a little tight for me – and on a 60 ring gauge cigar, this is less than ideal.

From a nicotine profile standpoint, the Viaje White Label Project Stuffed Turkey is going to pack a punch – it is definitely a full-strength cigar  From a flavor standpoint, the notes had some depth to them.  I thought it was a little short of being a full-bodied cigar – and I assess it as medium to full bodied.   From a balance, while the strength does outweigh the body, I don’t think this is a case of the strength completely overpowering the flavor.

In fairness, I think this cigar deserves a smoke in about 8 to 12 weeks and if my experience changes at that point, I think it’s fair to give this cigar a re-assessment.   The biggest problem I had with the cigar I felt was the harshness and bitterness I got in the last third.  I think if the flavors from the first part of the cigar remained, this might have been a better cigar.  My gut feeling is that even if this cigar has some age on it, it is not going to be a very complex cigar.   My recommendation is if you want to smoke this, put it in your humidor and come back to it later.

Source: The cigars for this assesment were purchased from Outland Cigars in Charlotte, North Carolina.