CAO
La Traviata will introduce the popular “Luminoso” frontmark in a new
Maduro version, making its retail debut later this week.
Following
in the footsteps of the highly successful Ecuadoran-wrapped CAO La
Traviata Luminoso, the new Maduro version features a Connecticut
Broadleaf wrapper to lend a touch of sweetness to the
critically-acclaimed blend.
At 4.5” x 50, the new Rothschild will be available for an SRP of $5.10 per cigar, or $153 for a 30-count box.

“CAO
La Traviata ‘Luminoso’ is one of our top sellers, so it was only
natural that we gave CAO fans a new take on one of their favorite
cigars,” said Ed McKenna, CAO’s senior brand manager. “Rick Rodriguez
and I are looking forward to receiving some great feedback about CAO La
Traviata Maduro Luminoso on our website, caocigars.com.” 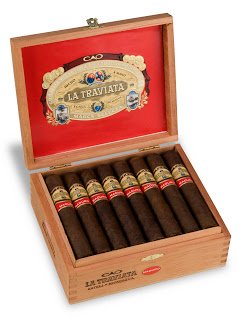