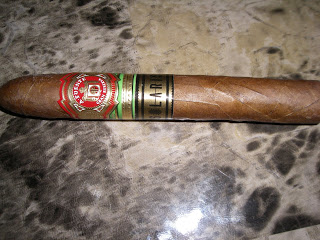 The Solaris by Arturo Fuente is the fourth installment of South Florida retailer Smoke Inn’s Microblend Series.   The series was created to commemorate Smoke Inn’s 15th anniversary.  The concept involves Smoke Inn teaming up with some of the biggest names in the cigar industry to produce a one time limited run.   The series launched in late 2010 with the Tatuaje Anarchy (our #3 Cigar for 2011).  It followed by the 6 x 60 Padron 1964 Anniversary SI-15, and the My Father El Hijo (our #24 Cigar for 2011).   The Solaris marks a change in the series in that the first three cigars of the Microblend Series were made by renowned Nicaraguan-based cigar-makers.   For the Solaris, Smoke Inn turns to the Dominican-based Fuente family to make this cigar.   I’ve recently had a chance to sample the Solaris and this cigar proves to be another outstanding effort by both the Fuentes and Smoke Inn.

In addition to turning to a Dominican-based cigar maker, there is another difference with the Solaris blend.  Smoke Inn played no part in the creation of this blend.  According to the recent press release, “When Smoke Inn Proprietor Abe Dababneh approached the Fuente Family
about making a Microblend, they decided this would be a perfect project
for a small batch of cigars made over 6 years ago.”

The word is 550 boxes of 10 were produced, and that is less than some of the other Microblend Series releases (such as the Tatuaje Anarchy which was 1500 boxes of 15).  Let’s break down the Solaris by Arturo Fuente and see what it brings to the table.  Since the cigars smoked were before the official release, we will do a pre-review and provide an assessment rating and score at a later time once these cigars hit the market.

The Solaris by Arturo Fuente uses a Ecuadorian Sun Grown wrapper.  Binder and filler details have not been disclosed.

As with each release of Smoke Inn’s Microblend Series, there is only vitola made available per blend (The Padron SI-15 had two blends: a natural and a maduro – thus two vitolas).  In the case of the Solaris, this is a 6 x 49 belicoso.

The wrapper of the Solaris by Arturo Fuente has what I term a brown-bag colored wrapper.  This is a term I typically reserve for a classic natural wrapper.   The Ecuadorian Sun Grown wrapper itself is slightly oily.  There are some bumps, some visible veins, and some visible wrapper seams.

There are two bands on the Solaris cigar.  The first band is a classic “A.Fuente Gran Reserva” band – that is red, gold, and white on the upper half, with lime green, gold, and black on the lower half.   There is a second band directly below it.   The second band has a gold background with black striping.  The main feature of the second band is the text “SOLARIS” in large black font.

For my Solaris by Arturo Fuente, I went with a straight cut through the belicoso tip.  This is always a default choice for me with a belicoso/torpedo vitola.  When I commenced with the pre-light draw, I was treated to some notes of black pepper and wood.  Overall, it wasn’t the most exciting pre-light draw.  Since this is a pre-review, while we are not providing a final assessment rating and score, it is worth noting that the pre-light experience is not factored in once we do provide a rating and score.  At this point, I moved on to lighting my Solaris cigar and awaited what this cigar would deliver.

The start to the Solaris by Arturo Fuente started with a quick dose of pepper on the on-set.   The pepper quickly diminished into the background and yielded to notes of coffee and cream.  The pepper that was present in the early stages became more present on the after-draw.

As the smoke of the Solaris continued into the first third, there were two additional flavor that became present with the pepper on the after-draw – floral and mint.  I also detected some notes of wood in the background as the coffee and cream notes remained in the forefront.  Overall, the combination of these flavors created a very smooth flavor profile.

The flavor pattern would hold for the first two thirds.  By the last third, the floral/mint notes on the after-draw dissipated.  The pepper that was on the back end surfaced on the main draw.  It eventually became the primary note during the last third.  The coffee and cream moved to the background.   I found the finish had some pepper spice on it.  I categorized the finish as spicy, but not overly harsh.  The resulting nub was cool in temperature, and soft to the touch.

A disclaimer up-front is that these pre-release samples were smoked within 48 hours of being received via mail.  Overall the burn of the Solaris was pretty good.  It did require several touch-ups to keep it burning straight.   The touch-ups did the trick to keep the burn straight, but they were more frequent than I would have liked.  The burn rate and burn temperature were ideal.

Long time readers of Cigar Coop know I am not a fan of belicoso vitolas because they tend to have burn and/or draw issues.  I don’t think the minor burn issues I described were related to anything around the shape of the Solaris.   At the same time, the draw was actually very good for a belicoso – making for an enjoyable smoke from start to finish.

From a nicotine profile standpoint, the Solaris is not going to overpower you.  For most of the smoking experience, I assessed the Solaris to be medium strength.  Toward the very end, I felt the strength kicked up a slight notch and crossed into medium to full strength range.  Even at that point, it was not overwhelmingly strong.   The flavor notes had what I coin “just enough depth” and provided a classic medium-bodied smoke.  The balance holds very well between strength and body – even at the very end when the strength kicked it up a notch.

Overall, this is another good release of the Smoke Inn Microblend series.  While I don’t think these cigars were in any need of immediate aging, I am very curious to see what this cigar will smoke like after some longer term aging (as I think it will get even better). Of the four Microblend cigars, this is going to be the one that appeals to medium strength, medium-bodied cigar enthusiasts.  Core Fuente cigar enthusiasts will enjoy this as well.   It’s a nice cigar that can be aimed to both novice and experienced cigar enthusiasts.  It is definitely a cigar I would reach for again.