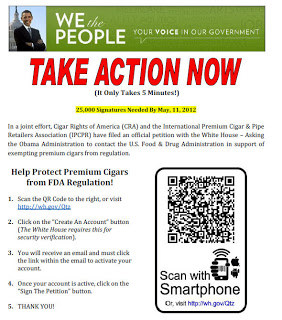 This past month, the most important petition in the history of the cigar industry in the United States was launched.   The Cigar Rights of America (CRA) and International Premium Cigar and Pipe Retailers Association (IPCPR)) launched a petition directed toward the Obama Administration asking for the exemption of premium cigars from FDA regulation.   The petition launched on April 11th required 25,000 signatures to warrant an official response from the White House.  The good news is that in about a  two week span, the petition got the required amount of signatures.  However, there is still more work to be done.

The cigar community should be commended for putting a full court press to garner the 25,000 signatures.  If you went on Facebook and Twitter, links to the petition asking for support of the petition.  Even though the required signatures has been reached, it is very important that the full court press continues.  Remember that President Obama signed the bill that originally gave the FDA control over premium cigars.   As a result, it is important for every cigar enthusiast to sign this petition to show as much support as possible that we do not want the FDA in our humidors.

I feel the social media piece has done a great job, but now it is important for this to go beyond social media.  If you have signed the petition, tell a friend.  If you go into a retail shop, print out the graphic here and give it to your cigar retailer to post in your store.  Every cigar retailer should be encouraging their customers to sign.   We know there are a lot more than 25,000 people that enjoy cigars and the best way to do things is to show strength in numbers.  It is time for this petition to get a big push from a grass roots perspective.

If you haven’t signed the petition, you can click here and do so.   Of course, be sure to pass the link on.

I want to say thank you for all of the great comments around Cigar Draft 2012.   This was the second year we posted our draft.    The draft takes a look at some of the new cigars that are in the pipeline.  If
all of these new cigars were released at once, which ones would be the
first to reach for?   We will be bringing back the Cigar Draft in 2013 with a target date of the 2013 NFL Draft.

As for the month in smokes, the two highlights of the month were the release of the Partagas 1845 Hertiage Rewrapped and the Avo Limited Edition 2012 La Trompeta.  Both of these cigars were additions to long-established cigar lines.  We also had a chance to smoke the upcoming Romeo by Romeo y Julieta.  The best cigar smoked this month was the Montecristo New York Connoisseur Edition.   This cigar was actually a late release in the 2011 calendar year, but actually falls into the 2012 Cigar Coop cigar year.   This is a cigar that was an exclusive made to the New York State market and it could be one of the best smokes this year.

Thanks again for you on going support,
Will

Q: (Received two of a the same question so paraphrased): Have you considered adding smoke time to your reviews?
A: I have thought about it.   Part of me thinks its a good idea.  I gave some thought to it this month and have opted to pass on it at this time.  It does involve some discipline to time this, and at this time there are other things I am looking to add into the cigar assessments published here.

Q: Will you be updating the Gift Guide?
A: The answer is Yes.   We did not do this last year, but will plan on doing this later this year.