Press Release: Smoke Inn’s Fourth Installment of Their Microblend Series, Solaris By Arturo Fuente, To Be Released This Month 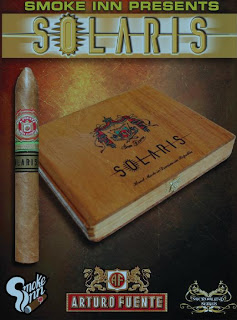 Smoke Inn’s Fourth Installment of Their Microblend Series, Solaris By Arturo Fuente, To Be Released This Month.

In late 2010 Smoke Inn Cigars released the Tatuaje Anarchy Cigar as a first in a four part series of small limited run releases to celebrate their fifteenth anniversary in 2011. Upon the success of Anarchy, the Padron Anniversary SI-15, and the My Father El Hijo, Smoke Inn decided that this concept called their Microblend Series (*), was an excellent way to produce high quality cigars made from select limited tobaccos with perfect consistency. Since they were produced only once, it was guaranteed that the very last cigar would smoke like the very first one with no variances in the type or quality of tobaccos used.

For this installment Smoke Inn played no part in the creation of the size or blend. When Smoke Inn Proprietor Abe Dababneh approached the Fuente Family about making a Microblend, they decided this would be a perfect project for a small batch of cigars made over 6 years ago. Carlos Fuente Sr. had produced a small batch of belicoso cigars made from Ecuadorian Sun Grown wrapper that was uniquely light in its complexion. The cigars sat and aged for over six years. When smoked, we found the flavor mellow yet complex. One could definitely taste the quintessential Fuente flavor profile behind the elegantly aged smoke.

Due to the limited amount of cigars, Solaris will come in 10 count boxes with a total production of 550 boxes. The 6×49 belicoso will retail for $8.95 a stick, $89.50 a box. Pre-orders are being taken with a special offer of a free limited edition Solaris tee shirt with every pre-order (a $15 value, while supplies last). All pre-orders will be shipped on the release date, Monday May 28, 2012. Solaris should be a big hit amongst Fuente fans and collectors; especially those who like to age their cigars.

* Microblend is a trademark of Smoke Inn Cigars.