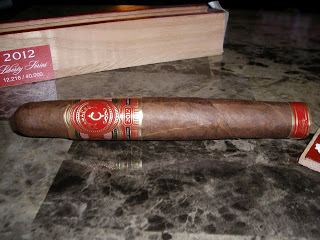 Camacho Cigars has announced on its 2012 installment of its Liberty Series, the Camacho Liberty 2012.  A big change from prior years is that the Camacho Liberty 2012 will be an all Corojo-blend of 2008 tobacco grown from the same lot.  This marks a change from previous years in which the tobaccos have come from different regions and different crops.

The Camacho Liberty series follows a micro-batch concept. Each year Camacho releases a limited number of a cigar blended specifically for the year in a single vitola. Each individual cigar is put into its own individual coffin-like box and numbered. From year to year the blend and design of the stick changes. Certain year editions are more sought after than others.

There were no specific details of the country of origin of the tobacco or the specific vitola..  The cigar will carry an MRSP of $16.80 and sell for $336.00 per box for a box of 20.  Unconfirmed reports say will ship by the end of July to retailers.