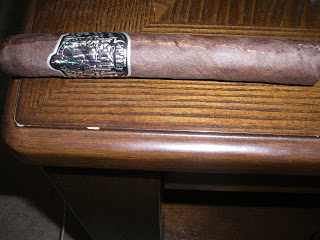 The 2012 IPCPR Trade Show featured three new cigars being launched by Gurkha Cigars.   At the show, details of the Gurkha Ghost were released.

The Gurkha Ghost joins the Gurkha 125th Anniversary and the East India Trade Company’s Red Witch as its current 2012 IPCPR offerings.  Gurkha continues its tradition with its innovative packaging.  The Ghost continues a special laser-etched band.  It will also be packaged in a tube.

We will have a special Cigar Conversation next week with Gurkha’s Marketing Director Oliver Hyams who will discuss the Ghost and more happenings at Gurkha Cigars.

The Ghost will be available in four sizes: