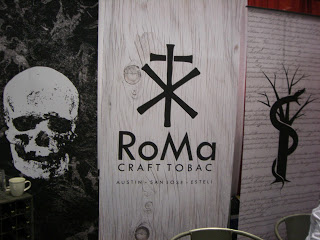 The 2012 IPCPR Trade Show was the first for RoMA Craft Tobac.   It was at the show where the company unveiled their latest blend, the Aquataine.

Earlier this year, RoMa Craft Tobac was launched as a collaboration between Michael Rosales and Skip Martin.  This collaboration combined the operations of their two companies, Costa Rican Imports, LLC and Galveston Bay Tobacco, LLC.  RoMa Craft Tobac’s two collaborative efforts, the CroMagnon and Intemperance have garnered a lot of attention in the online community.  So far, most of the distribution of the CroMagnon and Intemperance has been sold through Martin’s online Hava Cigar Shop.  While there have been some brick and mortar retailers signed up,  the 2012 IPCPR marked a chance for RoMA Craft Tobac to open up new accounts.

Here is breakdown of the RoMa Craft Tobac Aquataine.

According to the RoMa Craft Tobac web-site, the Ecuadorian Habano Ligero is from eighth and ninth primings. 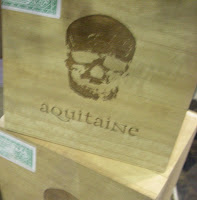