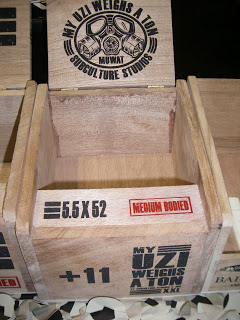 At the 2011 IPCPR, the MUWAT line was launched by Drew Estate. MUWAT was a joint-collaboration by Drew Estate Subculture Studios with Joya de Nicaragua.  It was originally released in 60 ring gauge sizes and it finished as our #18 Cigar for 2011.   Late last year, a modified version of the MUWAT was released called the My Uzi Weighs a Ton Bait Fish.  The Bait Fish was a 4 x 44 petite corona version of the MUWAT with an “amp’d up blend”.   It was originally a retail exclusive to New Havana Cigars, but recently has been taken national by Drew Estate.

The MUWAT +11 is the second non 60 ring gauge version of the MUWAT.  It is a 5 1/2 x 52 robusto sized vitola.  Like the Bait Fish, the +11 is also a modified blend.   The blend is different than the original 60 ring gauge MUWAT as well as the Bait Fish.  The +11 was described to me as falling somewhere in between the 60 ring gauge and Bait Fish in terms of strength.

Here are some more particulars:

While the blends differ in the vitolas, here are the current offerings in the MUWAT family.