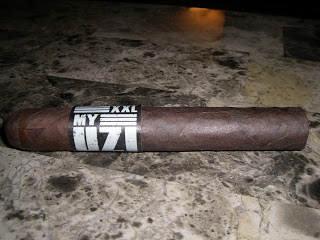 The My Uzi Weighs a Ton (MUWAT) +11 made its official launch at the 2012 IPCPR Trade Show.  The +11 becomes the second non 60 ring gauge cigar in the MUWAT line.  The MUWAT line was launched a year ago at the 2011 IPCPR Trade Show.  The MUWAT was a joint  collaboration with Drew Estate’s Jonathan
Drew himself and the folks at Joya de Nicaragua.  The  +11 is a 5 1/2 x 50 robusto sized vitola.  It was described to me as having a slightly different blend than the original MUWAT or the MUWAT Bait Fish.  I’ve recently had a chance to sample the +11, and I’ve found this to be an outstanding addition into the MUWAT line.

As mentioned above, the +11 becomes the second non 60 ring gauge cigar as a part of the MUWAT family.  The original launch of the MUWAT consisted of a 5 x 60, 6 x 60, and 7 x 60.  Late last year, a special retail-exclusive version of the MUWAT was given to New Havana Cigars called the Bait Fish.   A couple of months ago, it was announced the Bait Fish would be taken nationally and offered to retailers who carry MUWAT product.  The Bait Fish itself is described as a different blend than the original 60 ring gauge MUWATs.  The Bait Fish uses one of the stronger MUWAT blends known as  “EF” blend.  I’ve been told the MUWAT +11 does not use the EF blend.

While the blends differ in the vitolas, here are the current offerings in the MUWAT family.

The MUWAT +11 has a chocolate colored wrapper with some dark spots.   The wrapper has a silky complexion to it, but is also slightly bumpy when touched.  The dark color of the wrapper does a good job at hiding the wrapper seams.  There are still some visible veins on close examination. The foot of the cigar does not have a deep aroma, but I was still able to pick up cedar scent.

The band is standard MUWAT band.  It has black background with the silver font that says “My Uzi Weighs a Ton by Subculture Studios & JDN XXL”.

For my cigar experience with the MUWAT +11, I went with a straight cut into the cap.  I commenced with a pre-light draw and was treated to a combination of bittersweet chocolate, cedar, and wood.  Overall, this was a very good dry draw.  At this point it was time to fire up my +11 and see what the the cigar experience would bring to the table.

As typical with the MUWAT series, the +11 is not a cigar that is going to undergo a large number of flavor transitions, but it will do an excellent job at providing flavor nuances.

As the MUWAT +11 moved into the second half, the cigar got more leathery in the forefront.   At the same time, the chocolate notes started to diminish and there was an increase in pepper.   The pepper would take over by the end over the cigar.   While the pepper took over, it was not at the expense of the other flavors.  The close to the MUWAT +11 was spicy, but not harsh.   The resulting nub was outstanding – firm to the touch, and cool to the finish.

The MUWAT +11 is a well constructed cigar and this is reflected in the attributes of burn and draw.  From a burn standpoint, the +11 performs very well.   The burn line is straight from start to finish.  The resulting ash was firm with a salt and pepper color to it.  The burn rate and burn temperature were ideal.   The draw was outstanding – and in my opinion had the best draw of any of the MUWAT vitolas.

When I smoked the MUWAT Bait Fish, there was definitely some more strength from a nicotine standpoint compared to the original MUWAT 60 ring gauge cigars.  The Bait Fish was medium to full in strength.  The MUWAT +11 was more in line with the original MUWAT 60 ring gauge cigars as I assessed it to be medium strength.  From a flavor standpoint, the flavors are effective, but not overpowering.  I assessed the MUWAT +11 to be a medium-bodied cigars – consistent with the whole MUWAT line.  The balance between the strength and body is excellent with this cigar as neither attribute overshadows the other.

One complaint I heard from many people who smoked the original MUWAT was that it was a 60 ring gauge.  I didn’t subscribe to this theory because I feel when a 60 ring gauge is done right, it makes for a great cigar experience – and that is what the MUWAT brings to the table.  The great thng about the MUWAT +11 is that the robusto format should appeal to a lot of people.  I didn’t find the blend of the +11 to be radically different from the original MUWAT, but more subtly different.  This is a cigar that can appeal to both novice and experienced cigar enthusiasts.  This is certainly a blend I would personally reach for and smoke again.