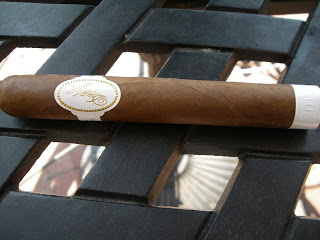 The 2012 IPCPR Trade Show saw Davidoff launch its (almost) annual white label limited edition – the Davidoff White Edition 2012. Davidoff has long been engaged with limited edition cigars.  Davidoff’s history in this area can be traced back to 1997 with the launch of the Davidoff “535” (commemorating the 10th Anniversary of the company’s store once located at 535 Madison Avenue in New York).  It wasn’t until 2002, where Davidoff formally launched its “Limited Edition” series.  On almost an annual basis, each release in the series would feature a different blend and a different vitola.  For 2012, the White Edition is a Robusto Gordo.  I recently had an opportunity to sample the Davidoff White Edition 2012.  Overall, I found this a very good cigar and one that fans of Davidoff blends should be very satisfied with.

There are 8000 boxes available with each box numbered in the series. Let’s take a closer look at the Davidoff Limited Edition 2012 White Edition.   I will disclaim this cigar assessment was based on a single cigar experience.

There are two bands on the Davidoff Limited Edition 2012 White Label.  The first band is similar to the classic Davidoff White label.  It features the name “Davidoff” in classic cursive gold-colored font on an oval field of white.  There are small gold circles going around the perimeter of the oval.  The word “Geneve” (in gold font) flanks to the right of the oval field.  To the left of the oval it features the text “White Label”.  The second band is on the footer.  It is also white in color and has “2012” in an embossed-like fashion.

For my smoking experience of the Davidoff White Edition 2012, I opted to go with a straight cut into the cap of the cigar.   After starting the pre-light draw, I was treated to some classic Davidoff flavors.   The dry draw notes yielded a combination of grass, hay, cedar sweet/spice, and a touch of cinnamon.  Overall, this pre-light experience did not excite me.  It wasn’t bad, but I’ve found most dry draws from the Davidoff line have usually not wow’d me.  However, these same cigars have provided solid smoking experiences.   It is worth mentioning that we do not factor the pre-light experience into our cigar assessments.  At this point, it was time to fire up the White Edition 2012 and see what the smoking experience would bring to the table.

After lighting the Davidoff White Edition 2012, the flavor profile of grass and hay that was found on the pre-light draw continued at the start.  While these flavors did not wow me on the pre-light, the fact that they had some more depth – and would be complemented by additional flavors made this flavor profile much more interesting.

The grass and hay notes were joined by black pepper notes and the pepper moved out into the forefront.  The pepper settled down quickly and went on even ground with the hay and grass notes.  Around the five percent mark, some natural tobacco sweetness surfaced in the background.  The natural tobacco sweetness never really took control of this smoke – and remained in the background for most of the smoking experience.

In the second half, the pepper once again moved into the forefront.  The grass and hay notes moved into the background and joined the natural tobacco sweetness.  The pepper notes held until the close to the cigar smoking experience.  While the finish was peppery, it was not harsh.   The resulting nub was ideal – it was firm to the touch and cool in temperature.

I have found the limited edition cigars from Davidoff to always have outstanding construction and the Davidoff White Edition 2012 was no exception.  The great construction was reflected in the attributes of burn and draw of the White Edition 2012.  The burn line remained relatively straight with minimal touch-ups.  There was a slight bit of flaking of the ash, but for the most part the resulting ash was firm.  The burn rate and burn temperature were ideal.   As for the draw, this gets high marks  – making the White Edition 2012 an enjoyable smoke.

When I assessed the Davidoff White Edition 2011, I mentioned that some Davidoff smokes usually aren’t in my profile.  At the same time I also mentioned the White Edition 2011 was still a smoke I’d reach for.  I can attest that the White Edition 2012 falls into this category.  The cigar is going to deliver more “zing” than the 2011 as it is going to have deeper flavors, more strength, and more spice.  The SRP of this cigar is $21.50. and while we don’t factor price into assessment ratings and scores, it still is important to mention this to the end consumer.   Given this cigar has some strength, I would probably not recommend this to a novice cigar enthusiast.  As for experienced cigar enthusiasts, I’d recommend this – especially for Dominican tobacco fans.  This is a cigar I look forward to smoking again.

Source: The cigar for this assessment was purchased from Burns Tobacconist in Chattanooga, Tennessee.