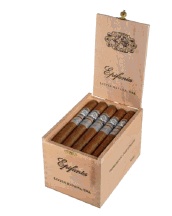 EPM’s Little Havana Series—which includes the Liga Miami, Epifania and current limited edition line Clase Reserva—has been a very exciting project for this small batch cigar maker. Following the release of the Liga Miami in 2010, the EPM line has received consistent commendation and acclaim throughout the market place. With the addition of the Epifania in 2011, EPM’s Little Havana Series became one of the most sought after small batch boutique lines on the market. Concurrently, the storied factory on Calle Ocho where EPM produces their Little Havana Series has experienced significant attention as well. Titan de Bronze is now producing cigars for entities such as Miami Cigar Company, Padilla Cigars, and La Palina Cigars. EPM’s Little Havana Series – along with the other lines being made at Titan de Bronze—have received stellar reviews and ratings, and have solidified the ultra premium boutique factory as one of the finest makers of premium boutique cigars in the business.

Primer Mundo Cigar Company is committed to balancing production with the growing demand; moving to a Preferred Merchant model will better enable them to accomplish this goal. By initially offering Preferred Merchant status to 100 accounts nationwide, EPM will be better positioned to balance order demands with production demands with Titan de Bronze.

EPM also launched their La Hermandad line this summer, which is made with Abe Flores at PDR Cigars in the Dominican Republic. La Hermandad has experienced a very strong reception from the marketplace and is now hitting shelves nationwide. With a strong focus on moving La Hermandad to the top of their production allocation, EPM is excited to be able to offer their most ardent retailers the opportunity to enjoy a greater level of exclusivity with the Little Havana Series.

“I’ve been very excited about the product we’ve been able to do in Miami and am very honored that we have so many retailers that appreciate the line,” says Sean Williams, President of Primer Mundo Cigar Company. “Titan has really exploded with a number of larger companies wanting to work with them. It’s a terrific thing. Sandy Cobas has truly built a great factory down there and Willy Herrera created some breakout blends before heading to Drew Estate that just took things to another level. Sandy’s doing a great job of integrating the increase production and we’re still cranking out some great blends.” Sean adds, “It’s important that we keep things in balance because it’s a very small factory and that’s what allows us to put out truly special cigars.”

The Preferred Merchant Program for EPM’s Little Havana Series, along with the growth of their La Hermandad Line, will continue to strengthen EPM’s status as one of the most promising true small batch boutique brands in the marketplace.

Additional information on EPM Cigars can be found at www.primermundocigars.com as well as on FaceBook and Twitter.