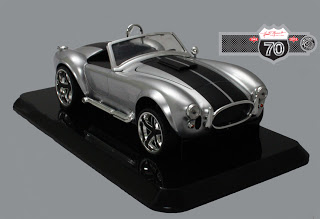 Miami, FL, January 7, 2013 – For Nestor Miranda’s 70th birthday on Valentine’s Day 2/14/13 the most interesting man in the cigar business is set to release a commemorative cigar for this historic milestone in his life.

The “Nestor Miranda 70th LE” will be released as a lancero cigar from the two factories that Nestor has had a tremendous relationship with over the years. The boxes of 12 cigars will feature 6 from the My Father Factory in Nicaragua and 6 from La Aurora in the Dominican Republic.

The cigars from Esteli, will feature a dark Habano wrapper over Nicaraguan fillers while its counterpart from Santiago will feature a Mexican San Andreas. Both cigars are Medium to Full and showcase the best from both regions.

The cigars will be packaged in a keepsake box that resembles a car Nestor has always admired. The body of the car will lift off the frame revealing three rows of 4 cigars in the chassis of the classic automobile. Only 1,000 individually numbered boxes will be made, with 700 being released initially. The remaining 300 will remain in the humidor at Miami Cigar & Company to be released at a later date.

According to Jason Wood, Vice President of Miami Cigar & Company, “We wanted to do something special for Nestor and create a keepsake at the same time. Nestor has always strived for the best, and we believe this cigar is up to the challenge.

”The “Nestor Miranda 70th LE” will make its debut over the course of two days at a series of events in New Mexico at Monte’s of Albuquerque on February 9th and 10th, 2013. The national release of the cigar will be on his birthday, February 14th and will retail for $14.00 a stick before local taxes.