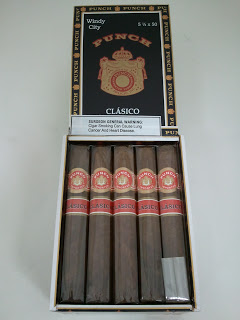 Arango Cigar Co. has announced its new “Clasico” series of premium cigars, made by General Cigar Company.  The four shapes, shared by Macanudo and Punch, are patterned after the top-selling cigar brand sizes from General Cigar Company.  The two Clasico lines are proprietary, being distributed only by Arango Cigar Co.
Macanudo Clasico and Punch Clasico have the same wrappers and similar blends as the acclaimed lines offered by General Cigar.  The Clasico frontmarks pay tribute to notable aspects of, and names, in the Chicagoland area.  The mild-to-medium-bodied Macanudo Clasicos are the 5-1/2 x 40 Mag Mile ($6.40 MSRP), 5-1/2 x 50 Windy City ($6.60), 6 x 54 Bucktown ($7.50) and 6 x 58 Gold Coast ($8.50) .  The dimensions of the medium-bodied Punch Clasico cigars, having the same shape names as the Macanudo Clasicos, vary slightly.  MSRPs are $2.60, $5.50, $5.60 and $6.20.
The Dominican-made Macanudo Clasico’s Connecticut Shade wrapper and the Honduran-made Punch Clasico’s Ecuadorian wrapper offer a smoke best described as “smooth,” according to Michael Gold, Arango’s president.
“Both Clasico lines,” Gold emphasizes, “are limited to brick-and-mortar tobacconists, and are not available to Internet or mail-order retailers.  We are presenting the cigars in 15-count boxes, another novel and price-friendly feature of the line.”  Macanudo Clasico and Punch Clasico are currently appearing on tobacco retailers’ shelves nationwide.
Source: The press release was sent from Dale Scott who represents Arango Cigars.