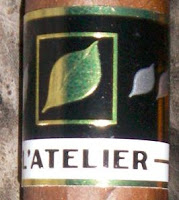 Sean Casper Johnson, one of the partners in L’Atelier Cigars was a guest on the 5/11/13 edition of Kiss My Ash Radio and disclosed information on the upcoming a project called “Extension de la Racine”.  This will be a cigar that will only be available to those retailers that come to the 2013 IPCPR Trade Show in Las Vegas.  Information on this project was also mentioned in an interview with Pete Johnson (who also is a partner in L’Atelier) with Stogie Review.

Both Casper and Pete Johnson indicated the name means “extension of the root”.  Casper Johnson explained that the blend was an off-shoot of the core L’Atelier blend, thus that was the impetus for the name.

Casper Johnson indicated that only retailers who place an order at the booth will be available to receive the cigar.

While no additional blend or size information was made available, Casper Johnson said the cigar would be packaged in cabinet style boxes of 20.