The Davidoff Masters Edition 2013 Club House Toro is the latest limited edition cigar to be released by Davidoff. As from the name, the cigar is meant to tie in with a golf theme.  The theme is reflected in the packaging of the cigar on both the box and its secondary band. In a recent press release for this cigar, Davidoff is positioning this as the kind of cigar that you can smoke over nine holes on a golf course. Time-wise that may be true, but typically cigar enthusiasts who seek out an ultra-premium Davidoff Limited Edition cigar usually want to savor the whole cigar experience. Recently, I had an opportunity to sample the Davidoff Masters Edition 2013 Club House Toro. Overall, I found this to be a solid limited edition in the Davidoff family.

The Davidoff Masters Edition 2013 Club House Toro will have only 7,000 boxes of ten produced for a total of 70,000 cigars.  Without further ado, let’s break down the Club House Toro and see what this cigar brings to the table.

In a lot of ways, this is a bit of an “all star” lineup when it comes to the tobaccos in this blend. The Yamasa region tobacco is found on the wrapper of the Davidoff Puro D’Oro. The Ecuadorian 702 tobacco for the binder was recently used as wrapper for the Davidoff 2013 Year of the Snake edition.
Wrapper: Yamasa (Dominican – 3 Year Old)Binder: Ecuadorian 702Filler: Dominican: Piloto and San VincenteVitolas AvailableThe Davidoff Masters Edition 2013 Club House Toro has been produced in a single size measuring 6 1/4 x 52

The Yamasa wrapper has a medium brown color with some darker marbling.  The wrapper had a slight amount of oil to it.  There are some visible veins.  The wrapper seams are well-hidden and more visible upon close examination.   The cigar itself had a classic barnyard aroma that many Davidoff cigars have become famous for.

There are two bands on the Davidoff Masters Edition 2013 Club House. The first band is similar to the classic Davidoff White label.  It features the name “Davidoff” in classic cursive gold-colored font on an oval field of white. There are small gold circles going around the perimeter of the oval.  The word “GENEVE” (in gold font) flanks to the right of the oval field. To the left of the oval it features the text “LIMITED EDITION”.

The secondary band says CLUB HOUSE in gold font.  That text sits on a white background with a golf-ball theme wall-paper on white background w golf ball wallpaper. The band has gold pinstriping on the top and bottom.
Preparation for the Cigar Experience

For my smoking experience of the Club House Toro, I went with a straight cut to remove the cap. After the cap was successfully clipped, I moved on to the pre-light draw.  The dry draw notes yielded a combination of citrus, wood, pepper, and cedar.  Overall I considered the pre-light draw to be satisfactory.  At this point I was ready to toast the foot of my Club House Toro and see what the cigar experience would deliver.

The start to the Davidoff Masters Edition 2013 Club House Toro provided me a mix of pepper, citrus, and grass notes.   Early on, the grass notes transitioned to more of a natural tobacco flavor.  There was no dominant flavor for the first ten percent.  It was around the ten percent mark where the citrus and natural tobacco emerged as the primary flavors.  The citrus also could be detected on the after-draw.  The pepper became a secondary note.  Meanwhile, the retro-hale took a little longer to get going, but once it did – it provided a nice sweet spice complementing the citrus and natural tobacco nicely.

Throughout the remainder of the first third and into the second third, the natural tobacco and citrus held as the primary flavors.  The pepper spice tended to move in and out from the background into the forefront from time to time.

In the last third of the Club House Toro, the pepper spice moved into the forefront and the citrus receded into the background.  The citrus and pepper flavors dominated the remainder of the cigar experience.  The end of the cigar had some spice, but it was not overwhelming – and it was not harsh.  The resulting nub was cool in temperature, but soft to the touch.

The Davidoff Masters Edition 2013 Club House Toro is a well constructed cigar – and this is reflected in the attributes of burn and draw.  For the most part, the burn line to the Club House Toro is straight.  There were a couple of points where it needed a touch-up, but nothing I would consider abnormal during a cigar experience.  The ash was tight and firm with a classic salt and pepper color.  The burn rate and burn temperature were ideal. 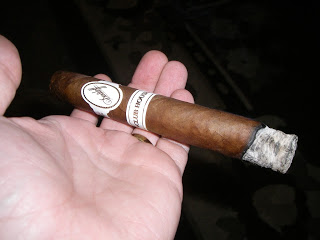 The draw to the Davidoff Masters Edition 2013 Club House Toro was excellent.  This was a low maintenance cigar to puff on and made the Club House Toro an enjoyable smoke.

From a strength perspective, I found that the Club House Toro starts out in the medium range.  By the time the Club House Toro reaches the last third, it progressed to medium to full strength. Meanwhile the depth of the flavors also start out in the medium range.  By the last third, the flavors accelerated quickly into the full-bodied range.  Overall, I found the strength and body balanced each other nicely in this cigar – although I gave a slight edge to the body in the last third.

Overall, the Davidoff Masters Edition 2013 Club House Toro produces an excellent smoking experience.  As mentioned at the start of this assessment, Davidoff has marketed this as a cigar as something to smoke over nine holes of golf.  I think I would be too distracted to smoke during a round of golf.  The cigar carries a $21.95 SRP, and while we don’t factor price into our assessment rating and score, we mention this for informational purposes.  This price point does qualify this cigar as ultra-premium, so this might be another reason why I’d rather smoke this in a leather chair than on the golf course.  While the cigar is not all Dominican (it has an Ecuadorian binder), this definitely is a cigar that will appeal to those cigar enthusiasts that are fans of Dominican tobacco.  Dominican tobacco fans should also appreciate this cigar.  I’d recommend this to an experienced cigar enthusiast – especially fans of Dominican cigars.  As for myself, this would be a cigar I would smoke again from time to time.

Source: The cigars for this assessment were purchased from Corona Cigar Company in Orlando, Florida.